And the Award Goes to 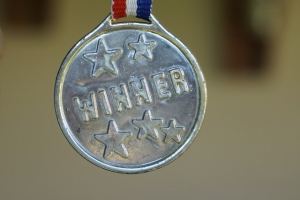 Rare is the time when I actually am all caught up with my schedule. Whenever I think I am caught up, something happens that takes that and throws it out the window.

Such was the case this past week. I was very much happy with the fact that I was on schedule and I had everything in hand. Nothing makes me feel better.

Of course, this is mostly delusional, at least for me. If there ever was an award for being delusional, I am quite certain I would be at the top of the list. The amazing thing about being delusional is that you never think you are.

As I was wallowing in my delusion and enjoying every moment of it, the Gracious Mistress of the Parsonage came and said rather sharply, “Are you ready to go?”

At the moment, I had no idea what she was talking about. And so I responded, “Huh?”

I’m not sure if that is really a word or not, but it accurately described my delusional moment at that time. I had no idea what she was talking about.

I was tempted to say, “Of course not. It’s Tuesday.” Fortunately, I did not yield to that temptation and just responded with another, “Huh?”

With a disdaining look she said, “You would forget your head if it wasn’t attached.”

I wouldn’t tell her, but I probably would not miss my head if I would forget it. After all, I don’t wear a hat.

“Today,” she said in a very serene voice, “the two grandchildren are getting awards at school.”

I’m not quite sure if I forgot or if I was not listening when the instructions came my way. At this point, I was not going to let anybody know, particularly my wife.

She gave me one of her classic sarcastic grins and we headed for the door.

Our one granddaughter was graduating from the third grade and the other from the fifth grade. Unfortunately, one was at 8:30 in the morning and the other was it 1 o’clock in the afternoon. It would make sense to have them all at once, but what has sense to do in our world today?

I did not want to complain, after all, it is our grandchildren, but I think the planning could have been just a little bit better than that. After all, sitting in the school cafeteria listening to the award ceremony is about as exciting as it can get.

The chairs that we had to sit on were uncomfortable, which was very fortunate for me because I was not tempted to fall asleep during the ceremony. I believe that was done on purpose.

Imagine getting an award for completing the third grade!

I cannot remember any such thing when I was going to grade school. Our great award was leaving school and going home in the afternoon. It just doesn’t get any better than that.

We live in a different world today where everybody gets an award for something or sometimes for nothing.

Then I remembered my cell phone in my shirt pocket. It is times like this that God had in mind when he invented this cell phone technology. I pulled out my cell phone and started checking my email.

Then I felt a sharp pain in my right ribs (thanks Eve) and I heard a voice saying, “Put that away and pay attention.”

Slowly and reluctantly, I returned my cell phone to my shirt pocket and tried to pay attention but I didn’t have enough quarters. Paying attention can be very expensive when you’re in situations like this.

The problem is that the grade school, particularly the third grade, had more children than my grandchildren. They were trying to give awards and recognition to all the children and I was only interested in one, my granddaughter.

I was musing on this for a while and then my companion said, “Look, there she is.”

When she said that, out came her cell phone and she began taking pictures of our granddaughter walking up to the stage to get an award. I can’t use my cell phone, but she’s at liberty to use her cell phone. Where’s the fairness in that?

Taking a hint from my wife, I reached for my cell phone only to realize that I was too late and the moment was gone. I glanced over at my wife and all I could see was the big smile on her face and her saying, “I got her picture.” All I could do was return her smile and congratulate her on getting the picture.

After each of the award ceremonies my wife and I went forward and she took pictures of me in the grandchildren together which made her rather happy.

All the way home that afternoon, she was giggling and chattering very excitedly. “Her” grandchildren received some awards. According to her, these were very special awards.

I smiled and was tempted to say, “Aren’t they my grandchildren too?” Why spoil the moment. She was excited and happy and it was worth my silence.

A wise man knows when “to keep silence.”