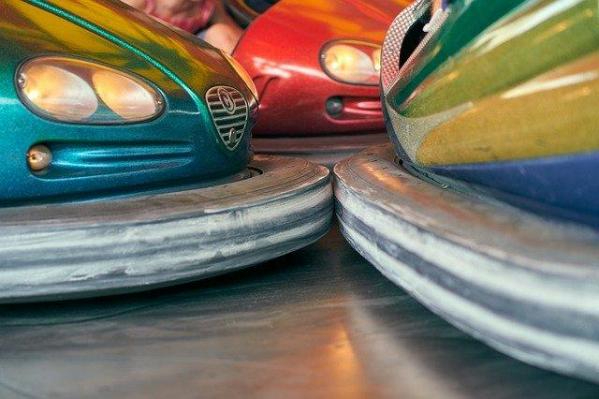 Life can get crazy because there are so many crazy people in the world. I know, I’m one.

Through the years, I have come to appreciate crazy people. They make life interesting and make me look less crazy than I really am.

The interesting thing is that a crazy person shows up in your life when you least expect it. There’s no way you can prepare for these crazy episodes. If only I could wear a camera on my glasses, I could make a fortune.

The other day I drove through the McDonald’s drive-through to order my morning cup of coffee to take to my office. Of course, I do that every morning as a routine.

This morning was rather a stressful kind of a morning, and I had a schedule I wanted to complete for the day. So I was thinking about what I was going to do as I was driving through the drive-through. In front of me was a blue car and a lady driving it.

She finished her order and then began driving forward, I started driving forward and happened to look left at the ordering place, and unbeknownst to me, she stopped and I bumped into her bumper.

Isn’t that what bumpers are for?

That was the beginning of one of the craziest episodes I’ve had in a long time. Oh, that my camera was in place.

As a young person, I enjoyed watching “Smile, You’re on Candid Camera.” I thought this was happening to me.

The lady jumped out of her car screaming at me and shaking her fist, and I thought it was a joke. You know how people like to prank other people, so I thought this was what was happening.

I looked at her and started laughing, thinking that this was part of a joke.

The more I laughed, the more she yelled and screamed at me. She used language that even sailors would not use in public. She asked me to do things to myself that are physically impossible to do. Enough said on that.

Then she went to her car, got her cell phone, came back, and took pictures of my truck’s license plate. I hope I don’t see it on Facebook. Then she took pictures of what my truck had done to her bumper.

I got out to look, and I had to look very hard to find it, and finally, there it was. A little scratch about the size of a fingernail. I looked at the front of my truck, and I couldn’t find any scratches at all comparable to her scratch.

She began yelling, “Don’t you dare touch me!”

I don’t do a lot of things and not touching her was at the top of that list.

Then she took her cell phone and showed it to me and said, “I’m calling the police.”

We were in the middle of the drive-through, and the customers behind us couldn’t get through because she would not move until the police got there.

The manager of McDonald’s came out and calmed her down and finally got her to move out of the line and wait for the police. I followed and parked next to her.

As we were waiting for the police to come, she was taking pictures of the tiny scratch. I did not talk to her; I just let her go and do her thing.

Finally, the police arrived. I was a little concerned because we would be wasting his time when there are more serious issues for him to deal with. But, crazy will be crazy.

He talked to us and took our information, and then he looked toward her car. He didn’t go over and look at it because he said it is not worth a police investigation. I agreed with him. So did the manager of McDonald’s. A scratch isn’t really that much damage. It probably could be fixed with fingernail polish.

The manager said that there were cameras and that incident would have been recorded.

She finally drove off, and I had a short chat with the police officer, and then we parted ways.

That was not the end of the story.

Have you ever faced a temptation so strong that it was all you could do not to yield to it?

One of my favorite hymns has this phrase, “Yield not to temptation for yielding is sin.”

I wasn’t able to place my order before this incident, so I drove around McDonald’s to get into the drive-through. You will not guess who was in front of me in the left lane of that drive-through?

Oh yeah, it was the lady with the scratch on her car.

My temptation was to pull in behind her and make sure she noticed I was behind her. I wrestled with that thought for a moment or two.

After some thoughtful consideration, I pulled over to the right lane and, in fact, got ahead of her in ordering my coffee. In the McDonald’s store, that was the talk of the employees.

It’s not often that I get involved in such a crazy situation.

As I was driving away from McDonald’s a verse of Scripture came to my mind. “Watch ye and pray, lest ye enter into temptation. The spirit truly is ready, but the flesh is weak” (Mark 14:38).

Temptations will come every day, but I have the strength in Christ to resist every temptation for the glory of God.