Did I Tell You The Story…? 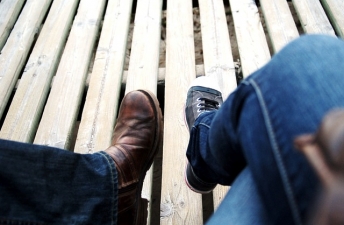 I was having a rather down day recently. You know how it is; you are going along 100 miles an hour and finally you crash. I was experiencing one of those reality crashes.

Reclining in my chair, drinking coffee, I thought of one of my old friends. Oh my, he has been gone for almost 5 years now. How time flies by so quickly!

You know you have friends and then you have those who are really friends. He was without a doubt one of the latter. In fact, I do not have any friend that quite equals him as a friend.

Thinking about him, I began chuckling. The Gracious Mistress of the Parsonage came in about that time and said, “What are you laughing at?”

She knew I was going through a rather busy schedule and to find me sitting in a chair chuckling was a little strange.

“I was just thinking,” I said while still chuckling, “of my good friend Brother Lloyd.”

As soon as I said that, she started chuckling herself and sat on the couch. We knew Brother Lloyd for 30 years. In those 30 years, we have had some great times with him and his wife. The last five years of his life, he was a widower.

It seemed like nothing got him down for long. Oh yes, he had his issues and would give you a commentary on his issues. He never was afraid to speak his mind. He had an opinion on every subject under the sun and some over the sun. He must have had a great mind because he always gave people a piece of it.

I knew anytime I was struggling with something, all I had to do was call and he knew how to solve every problem in the world.

We talked on the phone quite a bit, but also we met for lunch at least once a month. He lived about two hours from me and so we met in the middle at a nice little restaurant.

Thinking back on him, I cannot say how much I appreciated our monthly lunches. It got me away from my world and I enjoyed being in his world, even though it was a short time. We almost could order each other’s lunch and sometimes we did.

Of all the friends I have known down the years, nobody had more stories to tell than good old Brother Lloyd. He had a story for every subject you could think of at the time.

I would be talking about something in my life and he would interrupt, “Did I ever tell you the story about…?” Not waiting for my reply, he would go on with the story.

I have heard all his stories, and could tell them almost as good as he did. They must have been true because every time he told them they were almost word for word as before.

Because I admired the old brother so much, I listened to each story as though I was hearing it for the very first time. I must admit, they always had a great application, particularly concerning the subject at hand. How he was ever to do that I will never know.

Looking back, I wished he‘d put all his stories in a book. They would have been a fascinating read for anyone.

I must confess I did something once rather naughty. We were talking about some subject, I can’t remember what now, and I said, “Brother Lloyd, did I ever tell you the story about…?”

Without giving him an opportunity to respond, I went on with the story. The story I was telling him was one of his stories he told me probably 100 times. I tried to tell it from my perspective, but kept it almost word for word.

I was sure he would catch on but he never did. When I finished with “his” story he said, “That’s quite remarkable because something like that happened to me.” Then he went on and retold that story as though he was telling it for the very first time. As far as I knew, he never caught on. I simply listened as though I was hearing it for the very first time.

Occasionally, I will think of one of his stories and it brings a certain sense of encouragement to my heart. Although he has been dead these many years, his stories still live in my heart to this very day. I only wish I was as good a storyteller as he was.

One thing he taught me was that everything that happens in a person’s life, whether good or bad, is seed for a story. I am quite sure that there was a seed of truth in every story he told me. I never could tell where the twist was in any of his stories. He was such a wonderful brother that I really did not care.

Sometimes when my wife and I are talking I will say, “Did I ever tell you the story…?” To which my wife will always respond, “Yes, you did Brother Lloyd.”

I chuckled and then thought of what David said. “Let the words of my mouth, and the meditation of my heart, be acceptable in thy sight, O Lord, my strength, and my redeemer” (Psalm 19:14).

Everybody has a story, but God’s story is the only one that really matters.