From One Turkey to Another 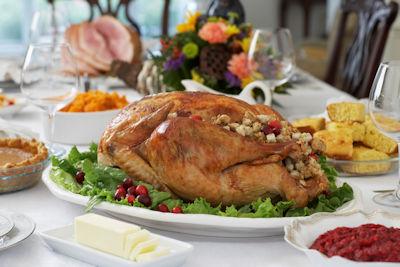 As a child, my favorite holiday was Christmas, second only to my birthday. These holidays were important because of the gifts I received. Oh, did I look forward to those holidays and all the presents I was going to delight in. And delight, I certainly did to the extreme.

Then slowly things changed. I got married and we began having children. It was then I discovered Christmas was different. I was the one paying for all the Christmas presents, not to mention the tree and the ornaments. I never realized how much Christmas cost. The older the kids got, the more expensive it was.

By the time Christmas is over, I am officially broke. My New Year's resolution is usually, "I'm never going to do that again." I keep it until Thanksgiving, which throws me off my game.

I soon discovered a holiday I could delight in. That holiday was Thanksgiving.

At Thanksgiving, there are no presents to buy, so my checkbook remained closed for that holiday. Of course, I did get the bill for the turkey we were having but that usually came in August. Outside of that, I could enjoy Thanksgiving without it costing me an arm and a leg.

Also, this is the only holiday where I can neglect my diet and get away with it. I can set around the table with family and friends and eat to my “stomach’s” content. Believe me; it takes an awful lot to get to that point of contentment.

I will not say that I abuse the opportunity, although I do, I just will not admit to it.

I love saying, “Can I have another piece of pumpkin pie?”

The stare the Gracious Mistress of the Parsonage throws in my direction is priceless. I usually throw a smile back at her.

Then I hear somebody say, “Of course you can. Let me have your plate.”

The smile on my face at that time stays with me for days, because nothing my wife can do with so many witnesses.

Thanksgiving trouble was inserted this year to my deep regret.

A couple of days before our Thanksgiving dinner I was sitting in my easy chair. The Gracious Mistress of the Parsonage was out in the kitchen putting together the Thanksgiving dinner. I was not paying attention; I was watching something on TV.

I then heard a strange word from the kitchen.

“Could you come and help put the turkey in the oven?”

What took me as strange is the fact that I never have been allowed to do any kind of work in the kitchen. Believe me, there is a story behind that. An invitation to come to the kitchen to do some work took me off my guard. But just for a second.

As I got up from my chair, a crazy thought began dancing in my head. I began to chuckle to myself. I quietly asked myself, “Will it work?”

You do not know something is going to work until you do that something. I thought I could catch my wife off her guard.

I asked her to repeat herself and she said, “Can you put the turkey in the oven?”

I thought I heard her correctly and this was confirmation.

Walking into the kitchen, the oven door was open, I walked over to my wife acting like I was going to pick her up and put her in the oven.

It was all I could do to keep from laughing at this point.

As I got near, I could hear her say, “Touch me and the wrong turkey’s going into the oven.”

For a while, I could not stop laughing and finally, she started laughing.

I was able to stop long enough to put the "real turkey" in the oven.

She said something weird, “I’m not going to thank you because you’ve already gotten enough thanks.”

I left the kitchen and headed for my chair and I heard her softly say, “I better not read this in your column next week.”

Pretending that I did not hear comes rather naturally to me. As I evaluated that last statement, I concluded that she did not say I could not write about it in my column. She just said that she better not read it in my column. So, I think I’m on good ground.

So, from one turkey to another, Thanksgiving is a time to be thankful for the good things. It is a time to laugh at situations that any other time of the year would not be laughable.

Sitting at the Thanksgiving dinner table with all the family and friends around us I was smiling. Then I looked at the Gracious Mistress of the Parsonage. She looked back with “one of those stares” shook her head and mouthed “no.”

This turkey knows when not to gobble.

Peter understood this when he wrote, “For he that will love life, and see good days, let him refrain his tongue from evil, and his lips that they speak no guile” (1 Peter 3:10).