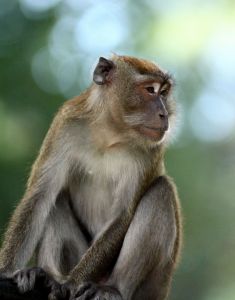 I am one of those who believe God created everything. I take the book of Genesis by faith, and rest on the character of God. I simply believe the Bible and have never found it to be wrong on anything significant.

I will allow that some things in the Bible I do not understand, but I trust God. Something as important as the creation of the world would carry enormous weight and significance. The Bible simply assumes that God is the Creator — and so do I.

Some people, however, do not believe in the biblical account of creation. They hold to the theory of evolution. I have never had the time to explore all of the ideas on this. So many people have monkeyed around with speculations on the origin of things that the waters are muddied beyond all reasonable hope.

As a pastor, much of my time is taken up with my pastor-duties. As a grandfather, I try to spend time with the grandchildren. As a husband, I spend a lot of time eluding the Gracious Mistress of the Parsonage's "honey-do-list." Not always successfully, I might add.

These things leave little time for other pursuits such as the theory of evolution. If evolution is true, I would like to know several things. If man evolved from monkey then why are there still so many monkeys in the world?

You cannot go to any zoo, anywhere, without finding scores of these delightful little creatures. The last time I was at the zoo, I pondered this query. If evolution is true, have these remnant monkeys, for some reason, refused to make the last leap into manhood?

Or, before making the step did they see how men live and treat each other and stepped back into their safe world of monkeyhood? No monkey I know wants to take credit for the shape this world is in.

Another thing I want to know; according the theory of evolution, man represents the highest intelligence in the evolutionary order. If that is so, how do you explain politicians?

Perhaps the best clue to the Creatorship of God would be one magnificent creation. If I had to boil all God's creative genius down to just one specimen, I would have no trouble whatsoever.

After God created everything else, the last thing on his agenda was mother. To say that mother is a special creative work of God is to put it rather lightly.

God poured into motherhood all His wonderful capacity for wisdom, love and ingenuity. Something happens to a young woman when she becomes a mother. Up until that time, she may be carefree and lighthearted, but when the "blessed event" occurs, a miracle takes place within the body and mind of that young woman.

I have seen it happen so many times, but I cannot explain it. The first thing that takes place in a mother is supersonic hearing. No matter how much noise is swirling around, a mother can always hear the voice of her own child.

As a young lad in short pants, many times I thought harshly of my mother's supersonic hearing ability. No matter how quietly I tried to sneak out of the house after "lights-out," my mother heard me.

Regardless of how many kids were in the basement of our house yelling and having a great time, all I had to do was open my mouth once and mother would yell down and say, "Jimmie, try to be quiet down there. You're making too much noise."

What amazed me more were those few times when she yelled down before I had a chance to open my mouth. What was that all about?

Then there is the matter of her X-ray vision. There was one rule in our house at suppertime. We all had to wash before coming to the table. My mother had some kind of hygienic fetish. The smallest speck of dirt would send her into frenzy.

Often, I would come to the table and my mother would say, "I still see some dirt on your neck. Go wash again."

Most of the time when she said this, she had her back turned away from me, working over the kitchen stove. I have often wondered if mothers have eyes in the back of their head, just like schoolteachers.

No matter where my mother was, she always could see me and know exactly what I was doing.

Another thing about mothers I still cannot figure out is their built-in lie detector. My mother could spot a lie six days ahead of time.

No matter how much time and effort I put into a story, my mother could always figure it out and always knew when I was lying. Don't tell me how she knew, she always knew.

Prevailing evidence suggests the Superman character of comic book fame was based on a real life mother.

Perhaps God created mothers the way He did because He knew what a job it would be to raise little boys and see that they become respectable men.

Even the great Apostle Paul acknowledged the importance of mothers when he wrote to young Timothy. "When I call to remembrance the unfeigned faith that is in thee, which dwelt first in thy grandmother Lois, and thy mother Eunice; and I am persuaded that in thee also." (2 Timothy 1:5 KJV.)

I believe God created everything ... and then He created Mothers.


The Rev. James L. Snyder is pastor of the Family of God Fellowship, 1471 Pine Road, Ocala, FL 34472. He lives with his wife, Martha, in Silver Springs Shores. Call him at 352-687-4240 or e-mail This email address is being protected from spambots. You need JavaScript enabled to view it.. The church web site is www.whatafellowship.com.