Has Anyone Seen My Castle Lately? 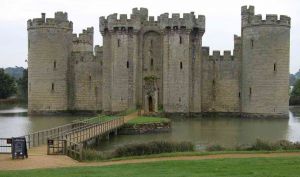 As of late, I have been fighting an insufferable barrage of intruders into that area commonly referred to as "My Castle." Normally I'm not a pessimist, but I have a feeling I am losing this battle.

I'm the kind of person that tries to get along with everybody but I must say I do have my limit. Regardless of what else I may have, I have a limit to intrusion into my Castle.

This all came to a head one day this week when the Gracious Mistress of the Parsonage spent the afternoon shopping with her daughters. I always look forward to these times because then I can be King of the Castle. Don't tell anyone, but I have a special hat I wear on such occasions.

My wife came home from her shopping only to find that her beloved husband had turned into a blubbering, raging maniac of the first-order. She is the kind of woman that deserves the first in everything, and brother, did she get it this day.

When she got her bearing, she looked at me and said, "What in the world is wrong with you? I go shopping and return and find you in this awful state of mind. What has happened?"

It took a few moments for me to collect anything that resembled sanity and a few more moments for me to regain volume in the speech department. Even so, I stuttered terribly. Finally, after some deep breathing exercises, I was able to talk.

"While you were gone," I stammered, "that telephone has not stopped ringing for a moment."

"Who's been calling you?" She asked trying to calm me.

"It's been one phone call right after another, and I don't think I can stand any more of it."

"Well, are you going to tell me who's been calling or not?"

“I have a good mind to sue the telephone company over this nonsense," I persisted.

My wife gave me one of "those looks" which finally brought me to my senses.

"It is all those politicians calling me with pre-recorded messages. No sooner do I hang up on one and the phone rings again with another politician begging me for my vote. I think I've had all I can stand for."

"You could get rid of the phone," my wife said with a rather sarcastic tone.

Then it begins to dawn on me. I have lost the rights to my Castle and have allowed intruders to rule. Once, I was in charge, at least when my wife was out shopping. Now, both my wife and I have lost control of our Castle.

Every month I pay my phone bill so that people can invade my privacy. I actually pay money to have other people take charge of my home. It just is not fair.

It does not stop with the phone service. I have surrendered my sovereignty in my own home to outside forces. There is the cable TV, the Internet service, the daily newspaper other cultural amenities that I have allowed to take charge of my humble domicile.

When I call the phone company to complain about the terrible service I've been getting recently, they put me on hold and just to up the torture level they play music. Music on the telephone! And not very good music, either. I have to listen to the music in order to catch the next "operator" that comes online only to refer me to another department in the phone company.

Just because I have a telephone in my home does not mean I want everybody to call me. I am working on a plan that when anybody calls me, either business or political, they have to pay a little bit on my phone bill. After all, I got my phone service for me to call out not for businesses and political jackrabbits to call me. If they have anything to say to me, the United States Postal Service has been in business for a good long time and I have a mailbox in front of my house.

Getting back to these political jackrabbits. I call them jackrabbits because they hop all over the field and you never know where they are standing at any one time. To be a politician today you have to have a severe case of schizophrenia so that you can be all things to all people all the time. If these politicians want my vote, they can do what they do among themselves; pay me for it.

It would be cheaper in the long run, and civil, for politicians to pay for their votes. Instead of spending $100 million to get elected to a $100,000 a year job, they could write checks to the general populace of which, there would be much more civil feelings towards these politicians.

Then, the status of my Castle could be restored to its former glory of silence and solitude.

Even the Bible promises this for God's people. "And my people shall dwell in a peaceable habitation, and in sure dwellings, and in quiet resting places" (Isaiah 32:18 KJV).

It is an endless battle to keep the world from intruding into my Castle, but it is worth the effort.