If This Is Autumn, What Was Summer? 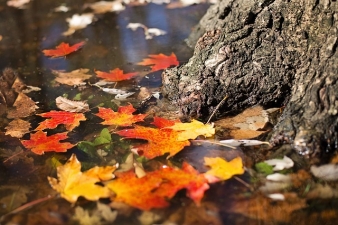 The Gracious Mistress of the Parsonage can say one thing and I can say something completely different. There are those rare occasions when we are on the same page, the same sentence and almost the same words. Those occasions do not come as often as I would like.

The good news is, we are all on the same book, which makes the difference.

The other day, for example, I was in a panic mode. I was trying to get stuff done and was not making progress. Finally, the Gracious Mistress of the Parsonage said, “What are you in such a fuss about?”

“Well,” I said rather exhaustively, “it’s Friday and I’m trying to get my work done.”

My wife just stood there looking at me with one of those “looks” she is most famous for. Then, placing both hands on her hips, she said, “Silly boy, don’t you know it’s Thursday?”

It is quite disconcerting when you get something wrong. You think you are doing the right thing, but it turns out you are not. I think it is one day and it turns out to be another day instead. Sometimes one day looks exactly like the other.

As we were eating breakfast the other day, my wife stopped and said, “Do you know this is the first day of autumn?”

I had to stop and think about that for a while. That means summer is over and fall is in the air.

“If it’s autumn,” I said quite seriously, “why is it still so hot outside?” The last three weeks the temperature has been in the 90s and the heat index was over 100. That is really hot.

Looking at her, I said, “It sure doesn’t feel like autumn does it?” She agreed with me, which was quite an accomplishment on my side of the table.

A song says, “And the beat goes on.” I would like to change that a little bit and sing a song, “And the heat goes on.” Simply put, I found no difference between the first week of autumn in the last week of summer. After all, if it is autumn then the weather ought to act like it is autumn.

I did not realize how serious the heat was. I was going Wednesday morning to a local elementary school to participate in the “Pray around the Pole.” It was the first thing in the morning so I decided not to have breakfast before I went, but rather go to my favorite restaurant for breakfast after the event.

As I was walking to the pole, I noticed it was rather hot outside. Oh well, I thought to myself, I am not going to be here long so I can just endure it.

About eight of the teachers had gathered around the pole along with a resource officer. We gathered in a circle, held hands and began to pray. Many of them prayed and my job was to close the session in prayer.

As they began praying, I felt a little odd. Now my wife will tell you that it is not just a feeling; I am odd. But my blonde roots were beginning to manifest itself and I was feeling a little dizzy. I felt the sweat roll off my face and my legs were wobbling, more than usual. I really did not feel good at the time.

Then, it came time to close the session in prayer. I cannot remember what I prayed because every word that came out of my mouth felt weird and odd. I was getting dizzy and I was thinking to myself, “Just don’t fall down.” I knew if I fell down, somebody would call the ambulance and rush me off to the hospital. The last place I wanted to be.

When we were done praying one of the teachers looked at me and said, “Are you all right? Your face looks flushed.”

The more I stood there the wobblier my legs got. Finally one of the teachers said, “Let’s take him inside and get him some water.” In the meantime, one called my wife to come and get me.

I do not remember going into the school at the time. Everything was quite dizzy for me. Then the nurse came, checked me out and made sure I was okay.

As it was, I was having a heat stroke. I never had such a thing before in my life. I think I heard of them, but I did not know what they were.

As I was collecting myself a little bit, my wife and granddaughter arrived to take me home. They would not let me drive my own vehicle. Don’t tell anybody, but I sure was glad. I am not sure I could have driven that vehicle out of the parking lot.

It took several days to recover, but during recovery, I could not help but think of an incident with Jesus in the midst of the storm. “And he arose, and rebuked the wind, and said unto the sea, Peace, be still. And the wind ceased, and there was a great calm” (Mark 4:39).

You cannot always select the “storm” in your life, but you can always trust Jesus to get you through it.