It's Not My Father's World Anymore 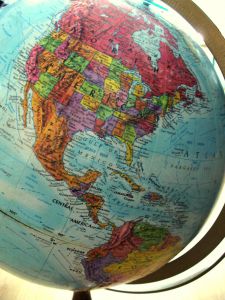 Celebrating another Father's Day without my father I cannot help thinking how much has changed since he died. If he were to return today, he would find things quite different.

In all reality, this is not my father's world anymore.

I might just as well say it. This is not my father's country anymore, either.

The country my father loves seems to have all but disappeared. During his time, a deep-seated patriotic pride permeated throughout our country. We were proud of what our forefathers had accomplished and we were willing to die to preserve that heritage.

Today, it seems the past is simply the past and has no bearing whatsoever on the present. This may be why history books are being rewritten today. This, however, is a fallacy encouraged by those who do not know the right hand from their left hand. In our country today, you are either far right or far left and nothing in between. Whatever happened to people with common sense?

Perhaps that ancient anonymous philosopher was right when he said the problem with common sense was that it really was not that common anymore. Perhaps the demise of the common man explains this phenomenon. Or it could be that most people today have been educated be on their common sensibilities.

The only people sweating these days are politicians up for reelection.

In my father's country, there was no such thing as arbitrary handouts but plenty of hands out. It was considered our patriotic duty to help our neighbor when they were in trouble. Nobody looked to Uncle Sam to solve his or her problems. It was a community affair not a government mandate. In fact, if the truth were known, and an evidently it is not, they stayed as far away from Uncle Sam as possible only communicating with him once a year on April 15.

In those days, they saluted the flag, recited the Pledge of Allegiance and were right proud to do so. Not one of them could imagine anybody ashamed of doing that in public.

Today a lot is being said about the separation of church and state. My father would not understand the way some people are interpreting it. According to what is going on today they are trying to keep the church out of the state but make good and sure, the state runs the church. Isn’t that why we had a revolution in the first place?

In my father's country, there was a separation between government control and people pursuing life, liberty and happiness. Oh, for those good old days.

Also, in my father's country baseball was a national sport not a business. I am not quite sure when it became a business but my father never thought it was. He often took me to the ball field on a Saturday afternoon to have fun, enjoy the game and eat the world's most delicious hotdog. At least he said they were the world's most delicious hotdogs.

Our purpose in going was just to have fun. He did his share of making fun and harassing the other team’s fans but it never crossed his mind to physically beat one of them nearly to death. If I remember correctly, wedgies were the order of the day.

When our team won we celebrated and high-fived everybody around us. When our team lost, we determined with everything within us to slaughter them the next week on the field. When we said "slaughter," we were talking figuratively.

Credit was something my father's generation frowned on. As a young person, I had in my mind to buy a bicycle. I took my father to the store to look at that prized bike.

Perhaps if my father could come back for a day we could send him toWashingtonDCand explain to them this whole idea that if you cannot afford something you cannot afford something. It seemed to make sense to me and I was only I young person at the time. I guess when you get older you lose a lot of that good common sense. Then if elected and go toWashingtonDC, you leave all of that good common sense back home with your constituency who wonder what they elected you for.

It may not be the same country my father loved, but I can still operate on the same principles that made him a patriotic father, and pray, “Establish thou the work of our hands.”

Rev. JamesL.Snyder is pastor of the Family of God Fellowship, PO Box 831313, Ocala, FL34483. He lives with his wife, Martha, in SilverSpringsShores. Call him at 1-866-552-2543 or e-mail This email address is being protected from spambots. You need JavaScript enabled to view it.. His web site is www.jamessnyderministries.com