It's Good Friday, but Sunday's a comin’ 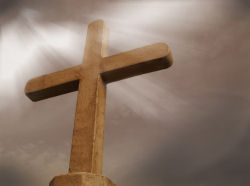 For those who follow the church calendar Good Friday is a special day. It is one of the high religious days among many Christians. Personally, I think it is a good one to remember and celebrate.

Overall, apart from a few exceptions, I do not like special days. As far as I'm concerned, every day I get up and take nourishment is a special day for me.

Everybody seems to have its own special day. I find it rather difficult to keep up on all of these "special days." If a person would honor and celebrate every "special day" posted on the calendar there would be no days to get any work done whatsoever. And, as luck would have it on my side, I would miss a very special "special day."

I am in favor of setting aside one day a month as the official "special day" of the month in which everything that anybody wants to celebrate during that month could be included. That way we could get the celebrating of special days done and then we can get back to business as usual.

One of the most frightening phrases a husband can hear is this, "Do you know what anniversary it is today?"

Every husband has been backed into a corner like this sometime during his marital career. I for one say it is not fair. Because everyone knows special is as special remembers, which puts husbands at a great disadvantage.

It is not that men cannot remember it is that a man's memory is limited and so must be very selective. And to be honest about this, anniversaries are simply not on any man's radar.

I learned this very early in my relationship to the young woman who graciously accepted my invitation of matrimony.

We had been dating for around a month and one night when I picked her up to go out she said something that confused me. "You know this is our first anniversary?"

My confusion lay in the fact that an anniversary had to do with something yearly. I had only known her for several months at the time. I know time gets away with a person but this was rather ridiculous. For the short time we had known each other it was impossible for us to have an anniversary of anything.

It was at this point I did something, although innocent enough at the time, that I have regretted the rest of my life. I looked at her and laughed.

That was when I was introduced to the marvelously mysterious world of women-lore. With a woman, anniversaries are not something to laugh about, at least in their presence. An anniversary is something to celebrate whether it makes sense or not.

When I realized how serious the situation was, I wiped that silly grin off my face and inquired as to what anniversary she was referring to.

"Why, don't you know," she said as seriously as I have ever seen her up to that point. "This is the first month anniversary of our going out together."

Now, what do you do on the first month anniversary of going out as a couple? However, the thing that really frightened me was, do we celebrate this every month?

What is the protocol for these monthly anniversaries? How do I keep track of all of this? What gift is appropriate? I was afraid that I would go broke before we got around to getting married.

My responsibility? To remember the latest anniversary.

How is a husband to keep track of all of these anniversaries? Once I mistakenly bought a special gift for what I thought was our fifth wedding anniversary. It turned out to be our seventh. Where those two years went, only my wife remembers.

Looking back over all those years I have a list of my own anniversaries I can never remember celebrating.

For example. The anniversary of when she slammed the car door on my finger. Ha, she probably forgot that one. (I wonder if Hallmark has a card for this?) I still have the gruesome scar on my finger reminding me of that anniversary.

How about the anniversary of the day the diamond fell out of the first engagement ring I gave her? Fortunately, someone had a microscope and we were able, after diligent search, to find the rock.

Then, there is the anniversary of the day she backed into my parked car. Enough said.

As we celebrate Good Friday, a very special day, remember that its goodness comes from the following Sunday when Jesus rose victoriously over sin and the grave.

It is Good Friday, but Resurrection Sunday's a comin’.