Laughter in Any Other Language Is Just Not Funny 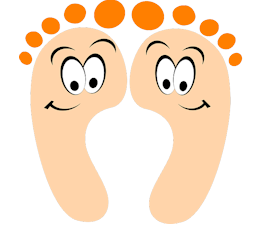 When I was in high school, I played on the volleyball team. During one practice session, I forgot to bring my sneakers. Not thinking much of it, I just played anyway.

During the practice, I stepped forward to protect the player on the front line and when he jumped, he came down on my right foot. The consequence was he smashed my big toe.

That little incident put me out of the volleyball team for the rest of the season. I had to go to the doctor and have him fix my toe. I had to go several times for him to fix it. Consequently, my toenail on my right foot grew in crooked. It has been a painful thing ever since.

For years, I took care of it, but not too long ago I was doing more damage than help and I did not know what to do about it.

The Gracious Mistress of the Parsonage suggested that I go have a pedicure.

Looking at her, I said rather sarcastically, “A pedicure is for girls.”

I must say it took me a long time to do the math on that one. I knew I had to have some kind of professional help with that toe. I was doing so much damage that it hurt just to walk. And, I’m not old enough to hobble around.

After a long evaluation I thought that I did not have anything to lose except, $275.

Not far from us was some kind of a Nail Salon. I went to it at least five times before I finally went in. It was a very humiliating experience for me. After all, I’m not a “girl.”

When I went in, finally, I noticed they were not speaking English. It turned out to be some Vietnamese family running this nail salon. When I walked in nobody was smiling, but as soon as the door shut behind me, everybody looked at me and started smiling. What’s that all about?

Somebody started speaking in Vietnamese and then everybody looked at me and started to laugh. I too laughed.

I had a moment of hesitation and I was about to turn around and go outside as fast as I could. It must have been the owner or manager of the nail salon who come up to me, greeted me very graciously and took me back to a chair where I was to have my pedicure.

I did so and while I was doing it, she got the hot water in the pan in front of the chair I was to sit in. As soon as I took off my shoes and socks, she pointed to my feet and said something and everybody looked at me and started laughing.

She said something in English that sounded like, “Too long.” Then everybody in the salon began to chuckle.

I honestly did not know what she meant. I did not know if my toenails were too long or if I waited too long to come and get a pedicure.

Then she started the process of a pedicure. I started feeling like a “girl.”

She was rather gracious, and knew exactly what she was doing and did a wonderful job with the pedicure. She cut my toenails like they have never been cut before. And, there was no blood!

I never had a pedicure before and really was not sure what to expect. Not only did she cut my toenails, but also she massaged my foot and my toes and they never felt better.

It began slowly to dawn on me that perhaps she was making fun of my foot. Could it be she’s never seen a “non-girl foot?”

I was feeling a little strange and thought to myself that this will be the last time I ever come here. Then when they were laughing at one point, I thought of the money involved. By coming here to this nail salon, I was saving $275. It was then that I began to laugh, and laugh very loud.

When I went to the check out to pay for the pedicure the manager said to me, “Come back soon?” I just nodded my head thinking of the $275 I was saving. Going out the door, I found myself still laughing.

I was reminded of what David said. “Then was our mouth filled with laughter, and our tongue with singing: then said they among the heathen, The Lord hath done great things for them” (Psalm 126:2).

When I refuse to do something because of my pride, I discover that when I face up to my pride and not allow it to define me that I can discover joy.