Learn To Recognize The Source of All Blessings 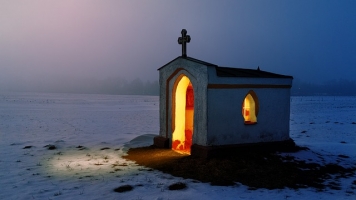 In 1978, I was ordained to the gospel ministry. To mark this special event, my parents surprised me with a new 1977 Dodge Aspen, the most spectacular present I ever received. It was white, with a red interior and beautiful cloth seats.

My old car had so many glitches and problems I took it to a psychiatrist. Finally, I donated it to the local junkyard and put it out of my misery.

At the time, a woman who attended our church lived four blocks away but insisted I pick her up for church each Sunday. Being young and naive, not to mention I needed warm bodies to fill the pews, I acceded to her request.

We called her Sister Claire and why she came to our church I never knew, but she faithfully attended each Sunday.

I picked her up just before the morning worship service and escorted her to the back pew. She rarely spoke to anyone and in all the years I knew her never smiled. She was not the kind of person you could get close to and cultivate confidences.

She always brought two quarters to church. One was for the collection plate and the other she gave to me for bringing her to church.

At first, I was reluctant to take it. She appeared to be tottering on the brink of poverty and I felt guilty about taking her money. Nevertheless, she insisted.

One Sunday as I picked her up I noticed something different. I could not put my finger on it, but something was definitely different about Sister Claire.

I escorted her to her usual pew and heard a smattering of muffled snickers. One thing I cannot stand is being on the outside circle of a joke.

Just before I went to the pulpit to begin the worship service my wife whispered, "Did you see Sister Claire's wig?"

As I began the service, I could not take my eyes off Sister Claire. I had never noticed her hair looking that bad. I began the sermon segment of the worship service and realized why everyone was laughing.

I started to giggle. I coughed, cleared my throat, bit my lower lip but nothing could evaporate the giggle juices flowing through my entire body. Nothing is more pathetic than a giggle-doused minister trying to be serious and pastoral.

Sister Claire had her wig on backward. All I could think of were bad wig jokes and I did not know whether she was coming or going.

In all the time I knew Sister Claire, she called me to come to her home only once. She seemed upset so I hurried over to her house. I sat down and she blurted out, ''Pastor, they won't let me in the grocery store.''

I assured her I would look into the situation. I knew the manager of the grocery store, so I stopped in to see him and clear up the misunderstanding.

When I broached the subject, the manager stiffened and barked, "We have a court order against Claire ever coming into this store," with such conviction I realized it was something rather serious. Then he told me the story.

For several weeks packs of luncheon meat were found opened, with one bite taken out and the pack replaced. This confused everyone in the store so they kept a watch for the perpetrator.

Finally, someone spotted Claire opening a pack of luncheon meat. She took a bite, carefully closed it up and put it back.

I agreed with the manager that, for the good of the other customers, they should not allow Claire back in the store. We ordered meals-on-wheels for her and my wife and I often brought her a bag of groceries.

Shortly after getting my new car, an incident happened with Sister Claire that stretched my toleration. At the time, my life revolved around my new car. I know now it was wrong, but then I could only see that car.

Unbeknown to me, God put in motion a plan to cure me of my obsession. Have you ever noticed God knows just how to deal with us?

It was a normal Sunday morning and, as usual, I picked up Sister Claire for the worship service. I had the car for about a month and I still reveled in its newness.

Following the worship service, I took Sister Claire home. I watched her until she disappeared into her house. Then I noticed it. My first reaction was good old-fashioned outrage.

The seat where Sister Claire sat was soaked. Sister Claire had an accident on the front seat of my new car! Even now, after all those years, I still flinch a little.

I washed the front seat hundreds of times. Seven years later I traded it in for another car and, whether it was my imagination or not, I don't know, but I could still smell it.

When Sister Claire died two years after the incident, they found hundreds of thousands of dollars stashed throughout her house. She had no relatives and nobody knew where she got all that money.

When I heard this, I felt sad. All her money was not a blessing to her. She derived no pleasure from it nor did she ever receive any interest from it.

Not only could her money have been a blessing to her, but she could have used it to bless other people. She robbed herself of tremendous blessings.

I have come to recognize the source of all the blessings in my life. ''Blessed be God, even the Father of our Lord Jesus Christ, the Father of mercies, and the God of all comfort; Who comforteth us in all our tribulation, that we may be able to comfort them which are in any trouble, by the comfort wherewith we ourselves are comforted of God.'' (2 Corinthians 1:3-4 KJV.)

What God has placed in my hands is not to be selfishly consumed, but shared.