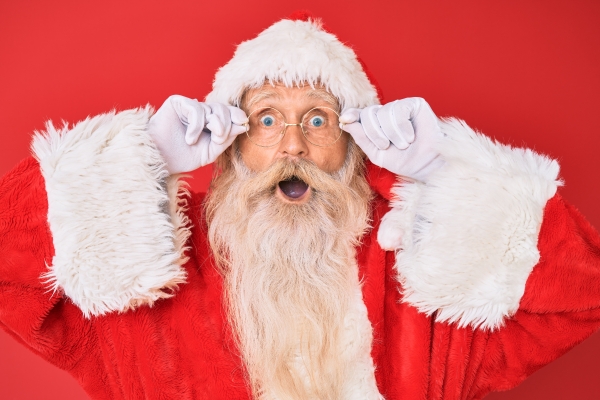 Christmas is the time of the year for some marvelous traditions, and it seems as though each area has its own. The ghosts of many Christmases past haunt us today.

One church I pastored some years ago had a tradition not found in too many churches, at least the churches I am familiar with. Each year at Christmas time, they entertained the Sunday school children with a Christmas party that included an appearance of jolly old St. Nick who gave gifts to the children.

Needless to say, I was not an enthusiastic supporter of this particular tradition in the church. I was appalled that they were mixing something so pagan with the real Christmas story. I did not want to confuse the children by mixing fiction with the true meaning of Christmas.

After all, I had trouble respecting a man who only worked one day out of the year. In spite of my disapproval, I realized that when a pastor goes to a church, he must accept it as it is. Only through time - and slowly - can certain things be slated for change.

After my first Christmas at this church, I made a mental note to work on eliminating this particular tradition. After all, how spiritual is it to have Santa Claus a part of the church Christmas program. I was a little embarrassed by all this. Each successive year it never seemed the right time. These things must be done carefully and at the right time. A wise pastor chooses his battles carefully, but I have never been mistaken for someone wise, pastor or otherwise.

Each year I promised myself, "Next year, for sure." The major problem with my plans to retire this yearly ritual was Henry. Good ole Henry had played Santa Claus in the church for more years than anyone could remember.

Believe me, I tried to get to the bottom of this, but nobody in the church could remember a time when Henry did NOT play Santa Claus. Henry took pride in this role. It was something he could do that people appreciated.

It would not be Christmas for the good folks at the church without the appearance of Henry as the merry red-clad elf from the North Pole. Another thing standing in my way of eliminating this yearly embarrassment." the Sunday school children loved it.

One year it all came to a head. My head that is! The night before the Sunday school Christmas party, Henry got sick. Not wanting to disappoint anyone, especially the children, Henry called me. He wanted me to replace him this year as Santa. "I just don't want to disappoint them kids," he wailed through coughing fits. After all, he reasoned, nobody would know.

Sometimes a minister is put into a situation that calls for him to go beyond the "call and duty? of pastoral goings-on.

Nobody in the congregation knew Henry was sick and would not play Santa, but Henry was confident that we could pull this off. I was not so sure. Henry's confidence in me was flattering, to say the least, but I was not sure I wanted to do it.

To me, at the time, it looked like a good opportunity to do away with this Christmas nonsense and I was so bold as to mention this to Henry. Mistake!

Henry was offended that I would even say such a thing and told me, in no uncertain words (which can't be printed here) what he thought of my idea. Some traditions never die no matter how many times you shoot them.

Putting my best judgment on the back burner of my mind, I finally agreed to cover to Henry and play Santa Claus. Nobody was to know about our switching roles, which made me happy.

In every dreadful situation, there is at least something to be thankful for. I was not going to tell anyone - for various reasons.

Of course, the "nobody? did not include the gracious Mistress of the Parsonage. If I was to pull this off, I needed her help. To my great consternation, she took great delight in this project. My wife helped with the costume, to make sure it fit and that nobody would recognize me.

She knew things before they even happened and took great delight in being the first person with some juicy morsel of gossip. She had been known to go into a deep depression for weeks at a time when someone found something out before she did.

Sister Gertrude had an intelligence network that would make the FBI and the CIA envious. She wore thick glasses; most people believed they were enabling her to see through walls.

What she saw that Saturday night at the Sunday school Christmas party was not exactly what happened. However, the facts were never an obstacle to Sister Gertrude. That Sunday morning, the entire congregation was abuzz with the latest gossip.

My wife and I did not know what was going on; but we did notice people staring at us in an unusual way. Henry, of course, was not in church that Sunday morning which only added credence to the scandal. "He's ashamed to show his face around here," I overheard Gertrude say to a group of ladies.

All week long, the buzz continued and my wife and I continued to get those glances. Along about Thursday, the gossip somehow reached Henry and, true to fashion, he got the greatest kick out of it, but he never breathed a word to anyone. The following Sunday, Henry came to church, per usual.

You could cut the air with a chainsaw and there were many quite seriously frowning faces staring at me during the service.

Henry sat there beaming like a kid who got a pony for Christmas. During the announcements, Henry stood and asked to say a word. He then turned around and said, "I would like to thank our dear pastor for taking my place last Saturday evening as Santa Claus for the children's Christmas party. I understand he was a sensation."

In thinking of that "Christmas ghost of the past," I thought of a verse of scripture that fit my good friend, Henry.