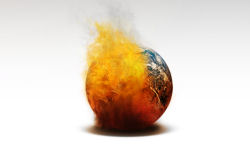 As far as I can remember, I have never been out of sorts with good ole Mother Nature. I have had, however, some issues with Father Time. I wish, for example, he would take a vacation. Really, all that marching on must be quite tiresome.

I go my way and I allow Mother Nature to go her way. It has been a marvelous system dating back as far as I can remember. I respect her, and she ignores me. Nothing could be more harmonious.

Recently, there are those who seem determined to try to embarrass Mother Nature. I suppose they have nothing better to do with their time, after all, all the major problems in the world have been solved. The focus of their assault on Mother Nature is in the area they call Global Warming or as they have recently called it, Climate Change.

Those of us, who have not strained our brain with extracurricular thinking, know the climate changes all the time from one season to the next. Without fail, spring follows winter, winter follows fall, fall follows summer and summer follows spring. A monotonous cycle dating back to the very beginning of time, whenever that was.

The experts are predicting that the temperatures will rise significantly in the foreseeable future. (Which, of course nobody can see.)

I think we need to have a different definition of the word "experts." It seems to me that somewhere along the line somebody has changed the meaning of the word.

For example, the financial experts on Wall Street were predicting prosperity for the whole country just before that ship hit the rocks sinking everybody on board. The primary financial expert at the time was . And we all know how that worked out.

Then, the economy experts in predicted the economy was booming, with nothing to fear. That turned out to be a boomerang, and boy, did the boom ring.

In addition, some theological experts made predictions. One televangelist predicted that in 2005 the would be attacked by some nuclear bomb sending repercussions around the world.

The same televangelist also predicted, because of certain actions Disney World did in , God would judge the state of . How do you suppose God was going to judge the state of , according to this preacher? Why a hurricane, of course, and it would destroy the entire state.

Since making that prediction, the state of has not had a serious hurricane.

Why is it that normally rational people make idiotic statements? After all, we idiots rarely make rational statements.

In the midst of all of these predictions of Global Warming, Mother Nature has turned a cold shoulder.

has had record low temperatures this winter. Even where I live in , tiny snowflakes kept falling on our heads. I had to requisition my retired long johns, buried deep in the attic, just to keep warm.

When the Global Warming conference was held in , a while back, there was such a snowstorm some people could not even make the conference. They next went to and the snow followed them like a well-trained puppy.

Even this week, a record snowfall has blanketed the entire Northeast of the . , also, has had an avalanche of snow, not to be confused with the snow job that is usually part of the city social climate.

If the predicted Global Warming pattern continues, we all will be buried in 18 feet of freshly fallen snow. Furthermore, I personally, want that televangelist to predict another furious hurricane season for . I could use another calm season.

All I can think is, some people have been educated far beyond their intelligence and have ended up in a world of hypothesis, which is where I think all their hype is coming from.

Mother Nature is having the last laugh.

While I was musing on this, the Gracious Mistress of the Parsonage made an interesting observation. She said, "Some people confuse education with intelligence."

A person who thinks he knows everything is a person who really does not know too much. The Bible says, "Wherefore let him that thinketh he standeth take heed lest he fall" (1 Corinthians 10:12 KJV). And, "The fear of the LORD is the beginning of wisdom: a good understanding have all they that do his commandments: his praise endureth for ever." (Psalms 111:10 KJV).

Just when you think you have everything figured out, something happens that completely disavows your supposition.

I personally take my refuge in the Bible, the infallible Word of God. "We have also a more sure word of prophecy; whereunto ye do well that ye take heed, as unto a light that shineth in a dark place, until the day dawn, and the day star arise in your hearts:" (2 Peter 1:19 KJV).

It is astonishing to me that sophisticated men could ever think they were so important that they could do something jeopardizing God's creation. After all, this is Our Father's World.

Mere man is no threat to God or to His creation.

The is pastor of the Family of God Fellowship, . He lives with his wife, Martha, in . Call him at 352-687-4240 or e-mail This email address is being protected from spambots. You need JavaScript enabled to view it.. The church web site is www.whatafellowship.com.