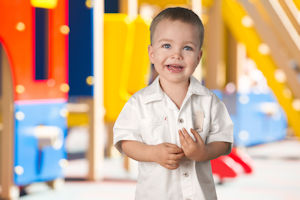 I love children. I love being around them and watching them play. Each Sunday, following morning worship service, I delight in handing out little bags of jellybeans to all the children.

Just between you and me, some adults have sneaked a bag or two. If it weren't for You-Know-Who, I would hand out several bags to each child.

Not long ago the Gracious Mistress of the Parsonage laid down the law on my generous distribution of jellybeans. I may give each child one bag after the Sunday morning service - and that's it.

No more of this, whenever I see a kid give them jellybeans, as has been my habit.

She mentioned some nonsense about giving the children a sugar-high - whatever that is.

Occasionally, I'm tempted to go behind my wife's back and slip a bag of jellybeans to a kid or two.

More often than I would like the Missus to know, I actually yield to this temptation, but you didn't hear it from me.

In spite of all this, I do not have any gift for working with children. I just don't know how to handle them and keep them profitably occupied.

Unlike the Gracious Mistress of the Parsonage, who has many gifts in this area of church ministry and has worked with children for many years. In this area of ministry, I reluctantly yield to her experience and expertise.

Once in a while, I get it into my head to give a children's sermon. Even though I know I don't know how to do it effectively, I still do it.

If my memory were any shorter, I could keep it in my back pocket.

Several years ago, such an opportunity presented itself. I say "opportunity," but it was more like an insane taunting, which usually gets my attention.

I scheduled a short children's sermon in a Sunday morning worship service. I worked hard on it knowing my little audience would have a rather short attention span.

My supreme idea focused on the Children of Israel. I wanted to explain to these youngsters how important they were in the scheme of God's planning for salvation. I had an object lesson (which I now can't remember) and was excited about presenting it on Sunday.

I was sure my sermonette would be a hit - this time. My confidence exceeded experience, to be sure.

Actually, the first part of the children's sermon went rather well, which caused me to feel I had finally mastered this ministry. Amazingly all the children attentively listened as I spoke.

Everything seemed to be going quite well and then I spied little Gary. I hadn't noticed him before, but there he was.

Gary was the kind of boy with 17 questions for every thought you might express.

As I spoke, I noticed the wheels were churning in little Gary's mind and I experienced a rush of panic. I did all I could not to look in Gary's direction.

Then, I heard that wee voice saying, "Pastor, pastor."

I thought if I just ignored him, I could get through with my sermonette. Gary, however, was the kind of boy who didn't take ignoring too kindly.

I heard a little gasp in the audience, which I recognized as Gary's mother.

Finally, to save face on my part, I turned to Gary, knowing it was a mistake and said, "Yes, Gary."

"Pastor, there's somethin' I jest can't figure out. According to what you said, the Children of Israel crossed the Red Sea, right?"

"Yes, Gary," I said, hoping to put it to bed and on with the lesson.

"Well, Pastor, you said the Children of Israel beat up the Philistines, right?"

"Ah, yes, that's right, Gary. They beat up the Philistines."

"And then you said the Children of Israel built the Temple. Isn't that right pastor?"

"Again, you're right, Gary," I said, hoping that was the end of the questions. There are times when I'm right, but this wasn't one of them.

I thought I heard a muffled giggle. I earnestly prayed that nobody would giggle, which would have set the entire congregation on a mirth trip.

"Yes, Gary. The Children of Israel were used of God in many ways."

I could see that Gary was more puzzled than ever, so I violated my rule of ignoring Gary and queried, "What seems to be bothering you?"

I knew I should not have asked that question. Experience with Gary told me not to, but for a brief moment in time I forgot. Okay, I just forgot.

"If the Children of Israel was doing all of this," as he paused here, I could tell something was really bothering him.

Finally, Gary looked me in the eye and asked, "If the Children of Israel was doing all these things, what were all the grown-ups doing?"

At that moment, the entire congregation exploded in laughter.

God's work usually is done by those who humble themselves as little children and just do it.