Riding the Hallelujah Train To the End 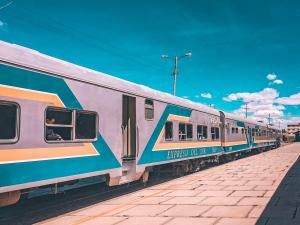 We had a long, hard week with problems and difficulties that took time to solve, if they even were solved. It is quite interesting to me that when I solve one problem, two other problems appear. I think they’re all waiting in line.

In particular, one day was rather difficult and zapped both of us of energy. I ordered a new desk for my office, and there were so many problems getting it delivered that I almost gave up. Along the way the desk was damaged and they returned it back to the store without even telling us. We had to reorder it all over again and wait for it. But then it came. Problem solved.

That evening the Gracious Mistress of the Parsonage and I sat down after supper to watch a little TV news and drink our evening coffee. We like to get caught up on the news of the day so we know what's happening.

There is nothing like relaxing after a hard day's work and just getting a little bit of energy back into the system again, and at our age, that takes time of which we have little.

As we were watching the news, the Gracious Mistress of the Parsonage sighed very deeply and said, “Why does the news always have to be negative?”

She had a point there. Every story on the news that evening was negative and left you just a little more depressed than when you started watching it.

We discussed some of the negative news being broadcast. None of it made sense to either of us. My opinion is simply, if it doesn't make sense to the Gracious Mistress of the Parsonage, I'm not going to try to find any sense for myself.

Each story was worse than the one before it. I felt the attitude in the room was going further south than I wanted it to go. Nothing on the news in any way sparked any bit of inspiration in my life.

For every negative story the news presents, there should be at least five positive stories that counter the negativity.

I looked over at my wife, smiled one of my gregarious smiles, and said, “I’m going to be riding the hallelujah train to the end. You want to join me?”

Looking at me quizzically, she said, “What in the world does that mean?”

I chuckled, and when I got control of my chuckling, “Do you remember good old uncle Ned?”

She shook her head and said that she never met him, so she did not know who I was talking about.

So I told her the good old uncle Ned story. He was the kind of guy that if you could discourage him, you were the only person that could do that.

He always had such a happy demeanor that when you were depressed, you just wanted to get around him to give you a little bit of cheer along with one of his nonsensical stories.

Uncle Ned went through trouble in his life, probably more trouble than the rest of the family knew, but if you talked to him, you wouldn't know he had a single trouble in the world. He was the most positive person I've ever known. I think he was more positive than Norman Vincent Peale.

When everything was going against him, and it didn't look like there was any solution to the problem, uncle Ned would say, "I'm just gonna ride the hallelujah train to the end." Then he would break into one of his infamous hallelujah dances.

It took me a long time to understand what he meant by that. If there is anybody who didn't have a reason to be happy, it was uncle Ned. But, you would never be able to find anybody happier than uncle Ned.

It wasn’t until after he had passed that I begin to understand what he was talking about.

The “hallelujah train” that he talked about was simply him taking control of his attitude at the time. He never allowed an incident, person or even family member to take away his happiness.

I begin to understand that he deliberately chose to ride the "hallelujah train," which made him in charge of his life.

As I told my wife the story, she leaned back and smiled one of her gracious smiles. Then she said, "I think I understand what he meant by that hallelujah train."

I can't remember anything that uncle Ned really did or accomplished in life. I'm sure there were things, but nothing came to my attention as I thought of him. The only thing was his attitude of happiness that nothing or no one could take away for him.

Walking into the house the next day, my wife looked at me and said, "Well, I'm riding the hallelujah train today."

I didn't have to ask her to explain, I knew exactly where she was going with this.

Troubles come and go, but if I allow them to control me in any regard, I am the loser. Therefore, each day I'm going to ride the hallelujah train to the end.

That evening I thought of one of the wise sayings of King Solomon. “He that handleth a matter wisely shall find good: and whoso trusteth in the Lord, happy is he” (Proverbs 16:20).

The door into the hallelujah train is simply trusting in the Lord.