So You Think You Can Pray 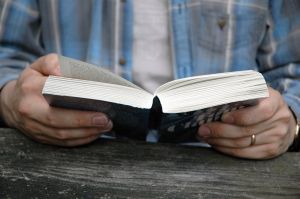 I had just snuggled down into my easy chair for an evening of reading and relaxation. I was reading a book I had just purchased and was quite anxious to get into it. The Gracious Mistress of the Parsonage was dutifully going through the daily newspaper. She tries to keep up on the news while I try to escape the news. She is more successful than I am.

All of a sudden, I heard from her side of the room, "I just can't believe this."

I tried to pretend I did not hear it and went back to my book.

"Of all the ridiculous things in the world," she said as though she were talking to somebody other than me. I pretended she was and continued my reading hoping that was the last of her outbursts.


Then I heard, "Aren't you listening to me?"

It was then I knew I had to put my book down and find out what all the consternation on her side was about. Some things you can ignore and then some things you better not ignore. My wife comes under the latter.

"What's got you all riled up?" I queried.

"It's this article in the newspaper about forbidding prayers and especially prayers using the name Jesus. Of all the stupid things in the world, this has to take the cake. I have a good mind to...."

I must confess I was not listening to her after this point. With all the turmoil and trouble in this world, people are making an issue about praying in public. A little while back Franklin Graham was disinvited to a meeting where he was supposed to have the opening prayer.

Any person with any degree of reason between their ears should know that humanity in general, our country in particular, is up to the chin in trouble. The leaders in our country have operated on the basic principle that they can handle the affairs of our country. Well, how is that working out?

The best and brightest minds in our country have caused everything they touch to turn into a complete disaster.

Never in our country have we had so much trouble and difficulty. Now, in light of this ineptitude, people are saying that we cannot pray in public. In my mind that is an oxymoron... which is a nice way of saying dumb bull.

Then drifting in the background, I heard my wife say, "Why do you suppose they're so afraid of prayer?"

Then it dawned me. She was exactly right.

As I mused on this, a thought came tiptoeing through the corridors of my mind.

If those claiming to be Christians feared God and prayer as much as those who are not Christians, something would really change in this country. There would be a new religious paradigm, I assure you.

I think I have figured out why there is so much hullabaloo against public prayer in our country. These people making the uproar are desperately fearful that somebody who is praying in public will really know how to pray and make a connection.

Not everybody who prays is really praying.

If these people really did object to prayer, they would keep their mouth shut. Nine out of ten people who pray are not really praying. Sure, they are saying a few words, maybe even quoting some Scripture, but they are really not praying and their prayer never gets above the ceiling.

If one tenth of the prayers prayed on any given Sunday were answered, most of the people praying would be surprised. It seems, at least to me, that the only people who really believe in the power of prayer are the people who do not believe in prayer.

I'm not too much concerned about the people who object to prayer. After all, there is no way under heaven they can stop me from praying. What I am concerned about are people who say they believe in prayer and yet have no evidence to support that claim.

Here is my challenge. I will show you what my life is with God, if you show me what your life is without God. Tell me where you came from and I will tell you where I came from. I think that is fair.

All we need in this country are just a few people who really know how to get a hold of God in prayer.