Stuck between a Virus and a Varmint 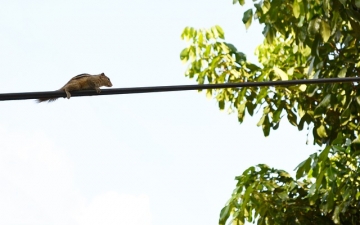 Normally, I’m not a superstitious sort of a person. But then again there is a good case to be made that I am really not normal. If you stop to think about it, (and I have), the average person is a composite of everybody and the description ends up to be that of nobody. That is exactly what I think about being normal.

I must confess, I do have a sliver of superstition running through me somewhere. Often I have the feeling that someone is looking over my shoulder and smiling rather sarcastically. I cannot prove it, of course, but I know it is there.

Several things happened this past week emphasizing this feeling of mine, and I am not at all convinced that it is simply coincidental. After all, is anything coincidental?

It all started when the computer at the church was viciously attacked by a computer virus. Who do you call when your computer has a virus? And, what in the world is a virus doing inside my computer? Doesn’t it have something better to do?

I do not know all that is associated with this computer business but I do know the outcome of a computer virus. I was merrily working along on my keyboard when suddenly, out of nowhere (what is cyberspace anyway) my computer screen began to disintegrate before my eyes. By the time I had closed my mouth the whole business was over.

Now my problems were just beginning.

The computer had been attacked from somewhere, and there was not anything I could do to prevent it. There I sat with a ton of work to do and my computer had come down with a virus. I did not know what to do but I did know what I was tempted to do.

Nothing on my computer worked anymore. The best I could hope for was to take it to some computer repair shop and let them work on at for a week or two; meanwhile I’m not able to finish my work.

Then I had a brilliant idea. Actually, I am not sure it was a brilliant idea because I get so few ideas they all seem brilliant. I remembered something on the computer called the “restore point.” If I could find this I could restore the computer to before the virus hit it. It was a long shot, but it was the only shot I had at the time.

After some finagling with the thingamajig (pardon the technical terms) I managed to find the Restore Point and in a few minutes, voilà (pardon my French), the computer was back to where it was before the virus hit it. I do not know how it works, all I know is it worked and I was elated.

I was so proud of myself, which as everybody knows is the first step down. And I was about to go down.

I was back to my work schedule and quite pleased with myself and was riding pretty high when suddenly the lights flickered and then went out completely. There was no electricity in the church building.

The first thing to do when something goes wrong is to PANIC. Through the years, I have become an expert in this area of panic. I have had plenty of practice.

Once I have thoroughly worked my way through the panic stage, I thought perhaps the church did not pay the electric bill. Upon checking, I discovered the bill had been paid. But still no electricity.

It was my privilege to call our friendly energy company and request a service call. Usually, there is a seven-year wait for all service calls in our area. That is just how thorough our electric company really is. They will go on no call before their time. In the meantime, I am sitting in the dark hearing some spooky noises, if I say so myself.

To my delight within an hour, the service truck from the electric company arrived on the scene. After a thorough investigation, the repairman discovered the trouble. I was rather worried that there was a major problem inside the church building that would cost thousands of dollars to repair.

But I was to be delighted for the second time that day when the repairman informed me of the nature of the trouble. It seems the trouble was on the outside of the building. As everyone knows, that is the responsibility of the electric company.

The problem turned out to be of the varmint kind. A nut-challenged squirrel had eaten through one of the major electric lines on the outside of the building thus cutting off all electricity from going inside the building.

“Here’s your problem, Rev,” the repairman said with a big grin smeared on his face. With that, he held up a nicely fried squirrel.

With the electric back on and at my computer purring like a kitten, I thought of a verse of Scripture. ''And we know that all things work together for good to them that love God, to them who are the called according to his purpose.'' (Romans 8:28 KJV).

Sometimes little things can frustrate us. But no person is defined by any one day or one incident. These little problems are usually temporary and serve only as a reminder that we are not in charge of anything at all.

Does anybody have a recipe for fried squirrel?