The Amazing Grace of "Do-Over," the Art of Second Chance 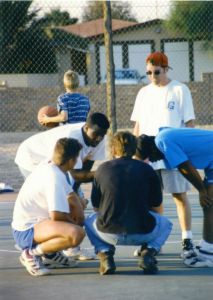 If anybody believes in "do-over," it is Yours Truly. This stems back to my pre-adult days littered with carefreeness and fun of all sizes and shapes. At that time, my whole life revolved around games. I was part of that unfortunate generation that had to make up their own games, as we were not privileged to have video games, iPods and Blueberries. Although I did enjoy a freshly baked blueberry pie with two scoops of ice cream whenever the opportunity presented itself.

One rule we had in our made-to-order games was quite simple and practical. If anybody fouled up in some way, he had 3 seconds to yell "Do-over." If the person was able to yell this before anybody else discovered the foul, they had the privilege of doing it all over again. I always thought this a very nice rule and used it quite generously.

Unfortunately, when I became a man (whenever that sad day happened, and my wife is still trying to find out when) I did not put away all of my boyish pranks. The one I carried over into adulthood was this attitude of "do-over."

It is my personal belief that this philosophy of "do-over" should be incorporated in adult life. I have found many times when I messed up that I wanted to yell "do-over" and fix a problem. If only this could be used in practical everyday living, what a difference it would make.

I remember as a child that whenever this "do-over" was applied to a situation at hand it solved a multitude of problems. Everyone agreed to the terms of "do-over,â€ which made things go rather smoothly and everybody was happy.

Personally, I think this would solve many problems in our world today. Whoever came up with the idea that you should have just one shot at something? It just does not seem fair to me. As soon as a person knows he has done something wrong, he should be able to yell "do-over," and correct the problem right there on the spot.

Just the other day I was driving down a very busy street when I happened to get in the wrong lane. It would have been wonderful if I could have just said loudly enough for everybody to hear, "do-over," then correct the problem. That was an option I did not have at the time.

What actually happened was, the offended driver shouted at me and it was not, "do-over." For a moment, we were coming at each other head on. Then in all the excitement, he got a little befuddled. He must have been a very religious man because with both hands he pointed towards heaven. In the excitement and the confusion of the moment, he used the wrong fingers. He could have used a "do-over."

An incident happened to me not too long ago at the grocery store having a large sale on cans of soft drink. There was a pyramid pile up front with the advertised soda. The can I wanted was about halfway up the pyramid and without thinking, which is my modus operandi, I pulled several cans from the middle. As soon as I pulled the cans from the middle it dawned on me what I had done and, more importantly, what was about to happen. If only I could have cried, "do-over," I could have saved the day.

Needless to say, the day was not saved, and for that matter, neither was I.

The next conscious thing I knew I had just eaten a slice of the marvelously delicious pie topped with two scoops of ice cream. No sooner had I finished that scrumptious slice then who should walk in but the Gracious Mistress of the Parsonage. One look at her giving me one of her looks and all I wanted to say was, "do-over."

"You did not eat a piece of that apple pie, did you?"

All I could think of at the moment was, "Do-over."

"I baked that pie for our neighbor who is sick."

I tried explaining to her that not everything was my fault. If she, so my reasoning mind raved, would not make such delicious apple pies I would not be tempted to eat them.

It was then that she looked at me quite sternly and said, "do-over."

I was invited to go to my room and think things over. As I turned this over in my mind, it finally dawned on me that God is the creator of the "do-over." I should have known anything as good as this originated with God. "If we confess our sins, he is faithful and just to forgive usÂ our sins, and to cleanse us from all unrighteousness"Â (1 John 1:9 KJV).

As I gave further thought on this, I begin to realize how wonderful a "do-over" is when God is at the center of it. No matter how big my problem or mistake might be it is never bigger than God's ability to call out for me "do-over."