To Scam or Not to Scam That Is the Phone Call 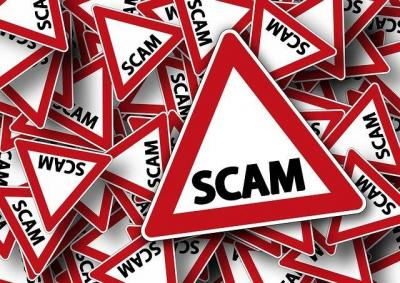 One day this past week, I decided to stay home and catch up on a little bit of reading. It's not often that I take a day and not go to the office and just pander around the house. Sometimes it's necessary to do such a thing, and I don’t do it often enough.

The Gracious Mistress of the Parsonage had a day planned of shopping as well as an appointment at her doctor. She would be gone the whole day, and so I would have the entire day to myself. I was looking forward to it. Who wouldn’t?

I really was mistaken about this idea. For me to have a day by myself is a wonderful idea, but it's still back in Kansas.

The wife just left the building, I had settled down with a stack of books I needed to go through and, of course, a hot cup of coffee to the left of me. I was looking forward to a wonderful day. I sighed a deep sigh and opened up the first book.

Then I got a phone call. I wasn't prepared for the phone call, so I answered, expecting to talk to someone.

It was a reminder that my car warranty had expired, and if I press number 1, I would be transferred to someone who could renew it. They also said that this is the last opportunity I have to renew my warranty.

I want to get the definition of the word "last." If this is the last opportunity I have, why have I received hundreds of these phone calls?

I wrestle with the idea of, is it okay to lie to someone who is lying to you?

The lady on the phone congratulated me on winning two round-trip tickets to anywhere I wanted to go. All I needed to do was come to their headquarters and they would put us up for three days and two nights, and the food was included.

I don't know how ideas dance into my head, but this one did.

I responded to the lady, “I’m sorry, but my religion does not allow me to fly on airplanes.”

The crickets on the other end did a little concert and then she got back to me and told me that I could give those tickets to anybody I wanted to. All I had to do was to come over to their headquarters, and everything would be fine.

"My religion," I explained, "not only does not permit me to fly on airplanes but does not allow me to give airplane tickets to anybody. I appreciate your offer, but I cannot do it."

Sometimes religion can come in handy. I chuckled to myself the rest of the day. When I'm through chuckling, I will confess my sin.

There were a few other phone calls, and I responded quite similarly to all of them. If anybody can harass a telemarketer, it is my wife's favorite husband.

Then I got a phone call I wasn’t prepared for. This phone call was from Duke Energy.

According to the person on the phone, they sent me four notifications that my account was delinquent and that my electricity would be cut off today.

This sort of rocked my afternoon. If I'm without electricity, what do I do? And you know what it's like to have your electricity reinstated with all the fees.

According to the person on the other end of the phone, I owed Duke energy $998.59 for the last eight months that I have not paid.

If you want to get my attention just tell me you want my money.

“What can I do,” I asked in desperation, “to keep from having my electricity cut off?”

Then I told him I did not have that much money to pay. He was asking for a credit card number so I could get up to date on my account.

He could tell I was hesitating here, and so he responded by saying, "If there is anything wrong, we will be able to refund your payment, so there’s no risk."

Then, I heard in my head, “ding dong, the witch is dead.”

I began to realize I was in the middle of a scam, and I didn't know it. As soon as I thought that, I knew I was in trouble but not the kind of trouble he was telling me.

He gave me a number that I could call, and I knew it wasn't the right number. After I hung up, I looked up my Duke Energy account and called them, and much to my relief, they told me that it was a scam and that my account was up-to-date.

I thought about this, and perhaps this scam was a payment for lying about the airplane tickets. I could have really been had.

Thinking about what I really could have been involved in brought a little spirit of repentance to my heart. I thought about a verse in the Bible. "Be not deceived; God is not mocked: for whatsoever a man soweth, that shall he also reap” (Galatians 6:7).

When I do negative things, I will reap negative things. And I was about to reap something very negative. But the thing that makes the difference is recognizing it and then repenting.