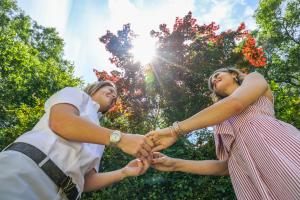 I have lived long enough to know that the only change that has any kind of reality is the change in my pocket. I keep track of that change with great supervision and count it every day.

When people tell me that this is a New Year and there will be a lot of changes this year, I search my pocket because that's the only change I want to know about.

Looking back over my life, the most significant change that ever came to me was the day I said “I do” to the future Gracious Mistress of the Parsonage. At the time, and it’s good for me that I didn’t know, I didn’t know what “I do” really meant.

Oh yes, I understood it had to do with marriage, but at that time, I had no idea what marriage was all about. I thought, as many of the songs tell me, love will conquer everything. All you need to do is have love, and that will be all you need.

When I said, "I do," my life changed like I never expected it to change. And mostly, I must admit, for the better. I have no complaints.

Knowing a young lady and then living with that young lady for 50 years was quite a change in my life. I will never know how she put up with me, and believe me, I will never ask.

That is the only change that had any real significance in my life. Of course, when the children came along, there was some aspect of change but not so much. Children come and go, and then they leave the nest.

As we start a New Year, everybody is anticipating change. But I don't believe in that kind of change, as I said. I think everything will be quite the same as it was last year. Sure, there will be a few modifications, but as far as change is concerned, I don't believe it's going to happen.

When we began last year, everybody was excited about the New Year. Then certain things happen that brought all of that to the floor. Who would've expected what had happened?

There were change-like happenings in people's lives this past year. But really, we all ended up almost where we started. That may not seem to be true, but here we are.

Whenever we go through something that people call a "change," on the other side everything is about the same. Maybe a little bit of variation, but nothing really changes when you come right down to it.

The Gracious Mistress of the Parsonage made this pretty clear to me just recently. As we were thinking about the New Year, she said, "What change do you see in the coming year?"

The only change I can think of came from a song from the sixties, "Oh my friend, we're older but no wiser” (Mary Hopkin).

The only change I can see on my horizon is that I’m going to get older. And believe me, I plan to get as old as I possibly can because I know what happens if you don’t get older.

And that song is right; we are older but no wiser, and that's not going to change. When I think I have arrived at a certain level of wisdom, I find out I didn't know all of the facts.

So, I explained to the Gracious Mistress of the Parsonage, “The only change I can see for me this year is I’m going to get older.”

She looked at me with one of her penetrating stares and said, “I don’t think getting older is going to make any change in your life.”

Of course, she was right. No matter how old I get, nothing is really going to change in my life.

Oh yes, I walk a little slower, and there are pains in my body in areas I didn't know I had. I forget a lot of things that I once could remember. I remember things that never happened. To me, that's a good thing.

To show that I'm not going to be changing this year, I said to my wife, "What change do you see in the coming year?"

It wasn't long before I realized that her idea of change and my idea of change had no connection whatsoever. She had a list of things she was going to change in the house.

I’m not going to contradict that change because I know the ramifications of doing such a thing. Chaos is not my idea of happiness.

When my wife changes her craft room, it will still be "her craft room." Sometimes changing things makes us feel good about ourselves and our life. In the end, everything is the same.