What It Was, Was a Peach Tree 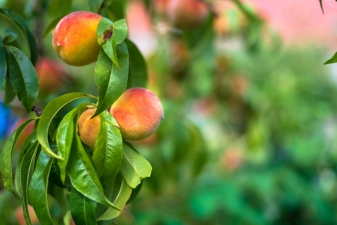 For some reason, this week, I had been thinking of my maternal grandfather. I was named after him, and therefore we had a connection.

I was thinking about him because this month I turned the same age as he was when he passed. I hope there's no connection there.

As a young boy, I would spend a month, every summer at my grandparents. They lived up in the mountains of Pennsylvania in a long valley. My grandfather was a farmer, and his primary income was his dairy cows. He taught me how to milk cows, and he did it the old-fashioned, hands-on way.

But my grandfather was quite different, a very quiet individual. I remember one afternoon sitting on the front porch with his brother, Dan. The three of us sat there, and the conversation went something like this.

Grandfather, “Sure is a nice day.”

After a few minutes, Dan said, "Sure is."

That was the conversation for the whole afternoon. That’s how my grandfather was.

As a farmer up in the mountains of Pennsylvania, he was very adept at growing things.

One day he came home and in his truck were four little bushes. At least they looked like bushes. I helped him plant them on the left side of the driveway. I never saw my grandfather so happy in all his life. Although he was smiling he wasn’t talking.

I asked my grandfather what we were planting, and he simply said, "Peach trees."

The next day a friend of my grandfather stopped in and saw the “bushes” along the driveway.

“Hey, Jim,” the friend said, “what’s that there that you planted?”

The friend laughed and looked at my grandfather and said, “We don’t grow peach trees here. And they don’t even look like a peach tree.” And he continued laughing.

It wasn’t long before everybody in the valley was making fun of his "peach trees." In fact, the traffic in front of my grandparent's house increased and slowed as they came by, and everybody looked out their window and pointed at those infamous peach trees.

I don't think anybody had ever grown peach trees in that area before. Everybody thought that peach trees were a southern fruit and no respectable Pennsylvania farmer, would ever grow one.

The rumor developed that they were not, but my grandfather was simply trying to fool everybody. After all, he was like that.

A year later, I was back at my grandparents during the summer, and several people would stop, look at those peach trees and asked my grandfather, "Jim, where are those peaches?" Then they would laugh at him and drive on. Nobody believed any peaches would grow on those trees. After all, they looked like small bushes.

It became one of the stories of the valley because everybody thought it was a ruse. No peaches this year on those peach trees. Which made everybody in the valley suspicious and just thought my grandfather was trying to pull a joke on them.

“Where’s them peaches,” people would ask as they would drive by and stop for a moment. “I want a peach.”

My grandfather would smile, and it didn't seem to bother him that he was the point of many a joke throughout the valley.

The third summer, it was the same. No peaches.

Then I went up on the fourth summer, and to my surprise, those peach trees had peaches all over them.

Everybody would stop by and ask my grandfather for a peach.

My grandfather would smile and say, “Those peaches aren’t ready to pick yet.”

When they left, he picked a peach from the tree, gave it to me, and told me, "Here's the first peach from my peach tree." I ate it and boy was it delicious.

Every day he would pick about a dozen peaches from the trees and take them into the house. My grandmother knew how to make peach cobbler like no other peach cobbler I ever had.

Day by day, he would take the peaches off the tree, and when people would stop, he would tell them, "They ain't ready to pick today." Then they would drive away.

Within a week, all the peaches were harvested from the trees.

Then the fun began. People would stop by and ask, "Where's those peaches?"

My grandfather would stare back and say, “What peaches?”

Then he would laugh as they drove away.

He said to me, "Don't let anybody tell you what you can or cannot do." And he walked away, smiling.

As I was thinking about him today, I thought of the Scripture; “And whatsoever ye do, do it heartily, as to the Lord, and not unto men” (Colossians 3:23).

If you know what you're doing, do it to God's glory, and don't let men distract you.