What’s so Cool about a Cucumber? 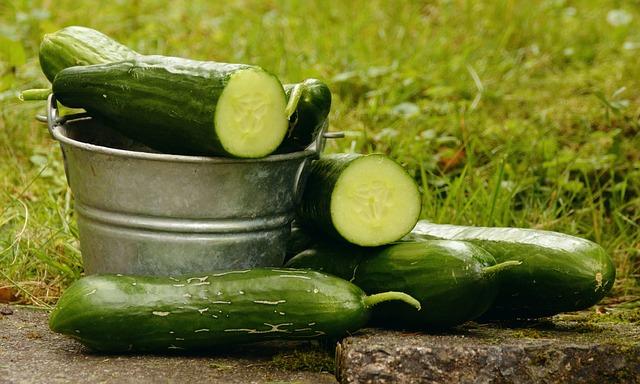 When it comes to vegetables, I am no connoisseur at all. The only vegetable I really like is carrot cake. According to The Gracious Mistress of the Parsonage, that is not a vegetable.

We often discuss vegetables, and she has brought to me a lot of proof that carrot cake is not a vegetable.

"Why then," I argue, "do they use the word carrot when they talk about this particular cake."

She will then stare at me, one of her vicious stares by which I get the message.

Then we argued that an apple fritter is not a fruit.

She wins in both of these arguments, but I still have yet to give in to her argument. Sometimes, as a famous psychologist says, it's better to be happy than to be right. I understand completely what he's talking about.

Then recently, I heard my wife say that something was "as cool as a cucumber."

I've heard that phrase so many times and still do not quite understand what it really means. I know that a cucumber is a vegetable, but I'm not really cool about vegetables.

We were driving somewhere, she was in the driver's seat, and I'm not quite sure what we passed, but she said to me, "Look at that. That's as cool as a cucumber if you ask me."

I wish I could remember what it was, but I was very confused when she made that comment. Up to this point, I had never heard her mention that phrase before. I've heard a lot of people say it, and I just shrug it off, but now you have The Gracious Mistress of the Parsonage using that phrase which was rather stunning to me.

At the time, I looked at her and said, "What's so cool about a cucumber?"

As she was driving, she laughed and said to me, "Oh, you know what I mean."

For a veteran husband such as I, to know what his wife means when she says anything is beyond the realm of reality. I like to live in reality, but oftentimes, I don't.

I think during my life I have eaten a cucumber. It's not that I don't like a cucumber; I would rather have something else like a vegetable of my own choosing, a carrot cake, for instance.

I'm not sure what cucumbers are, and I don't want to ask my wife because then she will tell me and at the next lunch or dinner, there will be several cucumbers on my plate. So I don't want that to happen.

I know what being cool is all about; I just don't know how a cucumber can be cool about anything.

If a cucumber is the standard of coolness, I will never be cool.

I could come up with different slogans, like, "As cool as an apple fritter."

If I understand the word cool, nothing is more cool than a fresh apple fritter. If you've ever had an apple fritter, you know exactly what I'm talking about. To me, being cool has nothing whatsoever to do with vegetables.

Of course, if you're a vegetarian, you will disagree with me all the way. I'm not a vegetarian; I'm more of a fruitarian. In my mind vegetables aren't cool, but some fruit is rather cool to me.

I may not really understand the phrase, but I will say, to this date, our marriage has been "as cool as a cucumber." I may not understand it, but I am happy if it makes my wife happy.

Whatever a cucumber has to do with anything, I'm not too concerned about. Let her have her cucumbers as long as she lets me have my apple fritters. A good marriage allows the other to have their way as long as their way is not my way.

Even after 50 years, I'm still trying to navigate this marriage ship. So, the other day I thought I could make a little more progress in this. I said to her, "My, you're as cool as a cucumber."

I thought I was making progress, but as soon as I said it, she looked at me and said, "So, you think I'm a cucumber?"

You try to get along, and sometimes it doesn't really get you too far ahead. I meant it in the best sense of the word, but she thought I was just joking. And here I thought she had high regards for a cucumber.

That proves that I’m not cool was a cucumber.

As I thought about this a wonderful passage of Scripture came to mind. “9 Two are better than one; because they have a good reward for their labour. 10 For if they fall, the one will lift up his fellow: but woe to him that is alone when he falleth; for he hath not another to help him up” (Ecclesiastes 4:9-10).

I guess it’s nice to know where you are in life And that you have a partner in life.