Where Have All the Men in White Hats Gone?

Religion Column - Rev. James L. Snyder - Where have all the men in white hats gone? 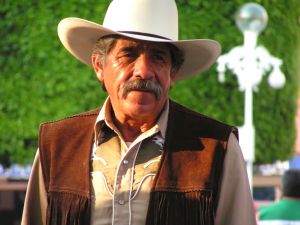 When I was growing up you could always tell who the good men were by the white hats they wore. Bad men always wore black hats. That made it rather convenient for those of us who were watching so we knew who would be winning at the end. When you were in trouble all you had to do was look for someone wearing a white hat.

Not only did the good men wear white hats but also they were able to solve every crime within a 60-minute period. How they did it, is anybody's guess.

Today, nobody wears hats, which has introduced a rather confusing element into our society. You can never tell the bad men from the good men. I know the hat does not make the man but it would sure help to identify the bad man from the good man.

I could name them all off. The Lone Ranger, Roy Rogers, Gene Autry, and John Wayne and the list could go on and on. All of these men wore white hats and they all took care of the bad guys, in their own way. You could be sure, at the end the good man always won. There was a certain sense of satisfaction knowing that all those bad men paid for their deeds and justice prevailed.

Of course, today we could never do this. There is something called "profiling." And people use this term as though it was a negative thing. "Oh, be careful so you don't profile that person."

Gene Autry always profiled his men and in the end, justice prevailed.

I look at it this way. If it walks like a duck, looks like a duck and quacks like a duck, the chances are pretty high I am looking at a duck. However, in our crazy world of uncertainty it is against the political correctness of our day for me to say this.

According to today's standards, I must look at that "thing" and not judge it by its appearance. “Why, don't you know dear brother, you might offend it and give it some kind of an insecurity complex?” How do I know but that duck in front of me will be offended by me calling it a duck? It is the epitome of insensitivity for me to assume that I have the right to call a duck a duck. Who knows, that particular duck might think it is a dog. After all, a quack is not that far from a bark.

Meanwhile, back at the ranch, confusion reigns.

During the last year, I have spent a little bit of time flying from here to there. And the security at these airports defies the intelligence God gave a termite. Going through the line I have to take off my belt, remove my shoes (which come very close to a stink bomb), empty all the pens out of my pocket and submit myself to a body search. Now, they have some kind of electronic gizmo that enables them to see through my clothes. In 10th grade, I dreamed of such a gadget and I am a little provoked that it has taken them so long to perfect this.

Two years ago, I traveled from Orlando, Florida to Manila, Philippines, through Japan and back again to Orlando. The trip was fine until I tried to re-enter the United States and upon a body search, they discovered I had one of those old-fashioned double blade razors. It was something of an antique that my grandfather gave me 35 years ago. I had been using it to shave ever since. After all these years of shaving with it, it took the intelligence of some security officer to discover that this was a highly dangerous weapon. Consequently, I was not allowed to enter the country with it.

I must admit that in 35 years of shaving with it, I had shed a little bit of blood. I never guessed in a million years I was in possession of a highly dangerous, illegal weapon. The officer who discovered it did not recognize it. When I told him it was a razor used for shaving, he looked at me suspiciously and then said, "Yeah, sure it is, Buster." No amount of explanation could convince him that it was part of my toiletries and he insisted that he confiscate it for the protection of everybody in the United States.

It was a close shave, but they finally allowed me to enter the United States upon the surrender of this highly sophisticated weapon. Only that security officer knows how close this country came to annihilation from an antique man's shaver.

Of course, looks can be deceiving. People who looked like someone you could trust have perpetrated the biggest frauds in our country. Bernie Madoff comes to mind. Sometimes what you think you are getting you are not really getting.

There is a spiritual application here. Some people may look religious on the outside but God knows what is on the inside.

"But the LORD said unto Samuel, Look not on his countenance, or on the height of his stature; because I have refused him: for [the LORD seeth] not as man seeth; for man looketh on the outward appearance, but the LORD looketh on the heart" (1 Samuel 16:7 KJV).

You can fool everybody in the world, but you cannot fool God. He always has the last word.

The Rev. James L. Snyder is pastor of the Family of God Fellowship, 1471 Pine Road, Ocala, FL 34472. He lives with his wife, Martha, in Silver Springs Shores. Call him at 352-687-4240 or e-mail This email address is being protected from spambots. You need JavaScript enabled to view it.. The church web site is www.whatafellowship.com.