Where’s Sherlock Holmes When You Need Him? 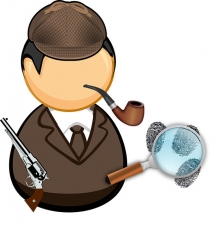 A good mystery does not reveal the mystery until the very end. All the way through the story, importance evidence points to that person and the other person and so forth. However, you must read the end of the story to find out the answer to the mystery.

Mysteries do not just exist in novels for short stories. In my case, mysteries are all through my life. I cannot manage one day without some kind of a mystery.

It is not because I am getting older either. As I remember my younger days, it too was filled with mysteries.

I remember that one Christmas Eve when I was going to solve the mystery of Santa Claus. I heard about this mysterious person, but I had never seen him and this Christmas, I promised myself, I am going to see who this Santa Claus really is.

That night my parents sent me and my brother and sister to bed early because it was Christmas Eve. We had our little party around the Christmas tree and admired where all the Christmas gifts should be come morning.

Then at the strike of 10 o’clock, we were sent to our bedrooms to await the coming of Santa Claus and the Christmas gifts. I decided to stay up and just see how Mr. Santa Claus worked his mystery on Christmas Eve.

Then I heard my mother say, “Don’t you think it’s about time?”

My mother and father looked at each other and giggled one of those hilarious giggles. My father said, “It sure is. Let’s go and get them.”

At the time, I really did not understand what he was talking about. What were they supposed to go and get? Why won’t they get out of the way so Santa Claus can come and do his “thing?”

They soon disappeared and I got excited because I figured the next person coming into the living room would be Santa Claus himself.

I faintly heard from the hall, “Shhhhhh, we don’t want to wake up the kids.”

I just could not believe my eyes. For years, my parents told us the tale of Santa Claus along with Rudolph the Red Nose Reindeer. They told it in such a way that I believed every word. Now, before me was evidence that what they were telling me all these years presented as a mystery, was not a mystery at all.

I just solved the biggest mystery in my life up to that point. My parents were Santa Claus. It was hard for me to swallow that information. It was not the mystery I wanted to solve.

Now I had another mystery on my hands. Do I tell my brother and sister that I had solved the biggest mystery we had in our home?

To reveal the mystery to them would give me great satisfaction.

On the other hand, to reveal the mystery to them would greatly disappoint them.

Now that I have solved that mystery, what do I do? Do I go for my satisfaction or do I protect my siblings from being disappointed?

It was then that I had solved the biggest mystery in life. That being, every mystery you solve presents a bigger mystery you cannot solve. That seems to be the way of life.

I am glad I learned that when I was young because it has been beneficial to me down through the years. I have learned to live with mysteries with no desire to uncover those mysteries.

When I say, “no desire,” I do not mean that literally. Yes, there have been many mysteries I have wanted to solve. But my biggest discipline is to let a mystery be a mystery.

This is so helpful to me, especially since I became a husband.

Every husband knows that his wife, as wonderful as she is, is a basket full of mysteries.

When I first got married, I thought my job was to solve every one of those mysteries. I learned very quickly that solving a marital mystery, particularly on the feminine side, is rather a dangerous venture with no good marks behind it.

Some things are better left in the mystery basket of life.

Paul understood this when he wrote, “And without controversy great is the mystery of godliness: God was manifest in the flesh, justified in the Spirit, seen of angels, preached unto the Gentiles, believed on in the world, received up into glory” (1 Timothy 3:16).

Some mysteries are too sacred to try to solve, rather we should rejoice in the mysteries associated with our Father which art in heaven.