You Can’t Have Your Cake and Eat It Too 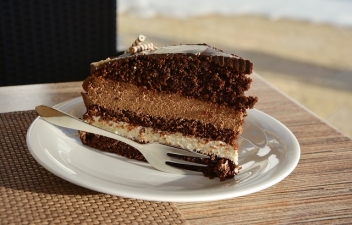 As I was standing in line I heard the woman behind me say, “Johnny, you can’t have your cake and eat it too.”

I did not know the background story because I did not hear the whole conversation. When I heard that my mind took me back to those thrilling days of yesteryear when my parents, both of them addicted to this phrase, said to me, “You can’t have your cake and eat it too.”

I cannot remember the reasons that this phrase kept popping up in my parents' conversation. But I never could figure out what in the world they were talking about.

Through the years, I have noticed people say things they have no idea what they are saying or what it even means. Sometimes people will say some odd phrase or a quote in order to bring the conversation to a standstill.

My parents were not interested, particularly when we were out in public, for me to carry the conversation. Many times, they would shut me down so that I would not embarrass them.

Also, I never could figure out why somebody on the stage would be encouraged to “break their leg.” It is not a rather mean thing to say to someone who is about to go out on stage and do some kind of performance? What mean person would hope that someone would break their leg in front of an audience?

Someone said to me recently, “May the force be with you.” I knew the movie he was quoting from but I had no idea what he meant for me. What is the force he wanted to be with me? Moreover, what if I didn’t want that force to be with me?

We often say things we do not understand or mean and I am as guilty as anybody else.

When something tragic happens some religious minded person will say, particularly someone on television, “My thoughts and prayers are with you.”

I do not know what came over me, but once somebody, I forget the situation, said, “My thoughts and prayers are with you.” For the life of me, I do not know what I was thinking about, but all of a sudden, I heard myself saying to that person, “Thanks but I don’t need your prayers.”

Why I said that I don’t know, but I do know that the person that said it to me was about his religious is a dead cockroach. If you don’t pray on a regular basis, why do I want your prayers?

But back to my days of youth. I cannot remember how many times my parents, both just as guilty as the other, said to me, “You can’t have your cake and eat it too.”

I am still as confused today as I was then. If I have my cake, why in the world can’t I eat it? After all, it’s my cake. If it wasn’t my cake, I don’t think I would eat it.

However, the most disturbing thing was whenever my parents told me that there was no cake in view. For example, the young boy standing in the line behind me had no cake on his mind when his mother told him that.

Once when my parents said that to me, I said, “What cake?”

My mother looked at me and said, “If you don’t know, I’m sure I can’t tell you.”

My father tried to explain to me one time by saying, “Once you eat the cake, it’s no longer yours.”

Where are parents trained to be parents? If I eat the cake, whose cake is it? In fact, if I do not eat the cake there is a danger that somebody else might eat my cake and I sure do not want that to happen.

I think the most disturbing time in a person’s life is when they find themselves talking like their parents. I distinctly remember the time when my kids wanted to do something and I responded by saying, “You can’t have your cake and eat it too.”

Saying things that we do not quite understand often gets us into difficulty particularly with family. I wonder if the apostle Paul had this in mind when he writes, “Let no corrupt communication proceed out of your mouth, but that which is good to the use of edifying, that it may minister grace unto the hearers” (Ephesians 4:29).

I must be careful that I am using words that encourage people rather than confuse them.