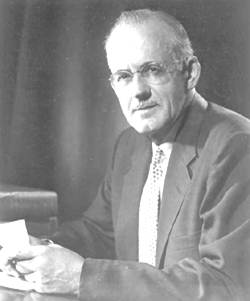 One time A. W. Tozer was asked to come to a meeting of the Fundamentalists of Chicago who were greatly distressed that the ecumenical council and Council of Churches had invited Billy Graham to come to Chicago.

Were they going to support it? So they asked Dr. Tozer to come.

Dr. Tozer attended and sat over against the wall. He knew his voice was weak and he didn't have great strength, so he would sit against a wall if he was going to speak so it would reflect his voice. Out came the notebook, out came the pen, and he listened and listened.

"I want to say that I have met Billy Graham. He did me the great honor of coming to see me in my study. I don't agree with everything Billy Graham says anymore than I agree with everything anybody says. But I want to warn you about something. It's possible for any of us to run against the wrong object and bend our lance for good. Now, come on brethren, let’s take our hair down. You could line all the fundamentalist in the United States up in one line and start them to preaching and they would have less effect on the United States than Billy Graham would have just clearing his throat."