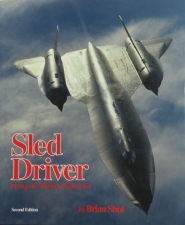 I'll always remember a certain radio exchange that occurred one day as Walt (my back-seater) and I were screaming across Southern California 13 miles high. We were monitoring various radio transmissions from other aircraft as we entered Los Angeles airspace. Though they didn't really control us, they did monitor our movement across their scope. I heard a Cessna ask for a readout of its ground speed.

"120 knots," Center answered. We weren't the only ones proud of our ground speed that day as almost instantly an F-18 smugly transmitted, "Ah, Center, Dusty 52 requests ground speed readout."

There was a slight pause, then the response, "525 knots on the ground, Dusty."

Another silent pause. As I was thinking to myself how ripe a situation this was, I heard a familiar click of a radio transmission coming from my back-seater. It was at that precise moment I realized Walt and I had become a real crew, for we were both thinking in unison.

"Center, Aspen 20, you got a ground speed readout for us?"

No further inquiries were heard on that frequency.

In another famous SR-71 story, Los Angeles Center reported receiving a request for clearance to FL 60 (60,000ft). The incredulous controller, with some disdain in his voice, asked, "How do you plan to get up to 60,000 feet?"

The pilot (obviously a sled driver), responded, "We don't plan to go up to it, we plan to go down to it." He was cleared.