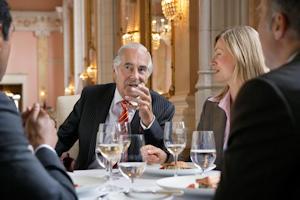 My husband, Michael, and I were at a restaurant with his boss, a rather stern older man. When Michael began a tale, which I was sure he had told before, I gave him a kick under the table. There was no response, so I gave him another poke. Still the story went on. Suddenly he stopped, grinned and said, "Oh, but I've told you this one before, haven't I?"

We all chuckled and changed the subject. Later, on the dance floor, I asked my husband why it had taken him so long to get my message.

"What do you mean?" he replied. "I cut the story off as soon as you kicked me."

"But I kicked you twice and it still took you awhile to stop!"

Suddenly we realized what had happened. Sheepishly we returned to our table. The boss smiled and said, "Don't worry. After the second kick I figured it wasn't for me, so I passed it along!"