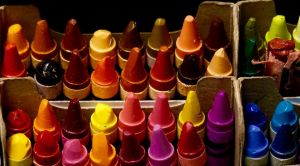 Little Johnny had been bringing his drawings home from kindergarten every day since he started a month ago. Each day his mother admired the pictures and hung them on the refrigerator. One thing started bothering her. Little Johnny only used black and browns for his drawings. Fearing a problem and not wanting it to get worse, she decided to take him to a child psychologist.

The psychologist delicately went to work. He gave Little Johnny a battery of psychological tests. He chatted with Little Johnny. Everything seemed perfectly normal. Every day for two weeks, the tests continued. Yet everyday, Little Johnny continued to bring home drawings in only blacks and browns.

Frustrated at not being able to get to the root of the problem and fearful that something was terribly wrong, the child psychologist decided to give Little Johnny some paper and a box of crayons and observe what happened.

Little Johnny opened the box of crayons and said, "Oh, Boy! A new box of crayons! At school we only have old boxes. The only ones left in mine are black and brown!"