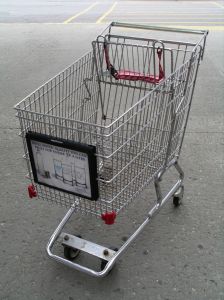 It was a Saturday afternoon, and Ray had rushed down to the local supermarket to hurriedly pick up some hamburger rolls, chips and a few condiments. The big game was going to be on, so he was having a few friends over to watch it.

The store was loaded with shoppers and as he headed for the six item express lane, the only one that didn't have a long line, a woman completely ignoring the overhead sign slipped into the check-out line just in front of him pushing a cart piled high with groceries.

Ray was quietly fuming at the anticipated delay. But the elderly cashier beckoned the woman to come forward, looked into the cart and asked ever so sweetly, "So Dearie, which six items would you like to buy?"