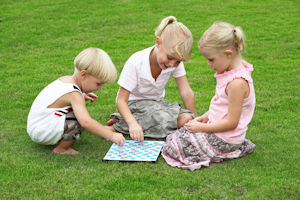 * Decisions were made by going "Eeny-meeny-miney-mo."

* Mistakes were corrected by simply exclaiming, "Do over!"

* "Race issue" meant arguing about who ran the fastest.

* Money issues were handled by whoever was the banker in "Monopoly."

* Catching the fireflies could happily occupy an entire evening.

* It wasn't odd to have two or three "best" friends.

* Being old referred to anyone over 20.

* The worst thing you could catch from the opposite sex was cooties.

* It was magic when dad would "remove" his thumb.

* It was unbelievable that dodgeball wasn't an Olympic event.

* Having a weapon in school meant being caught with a slingshot.