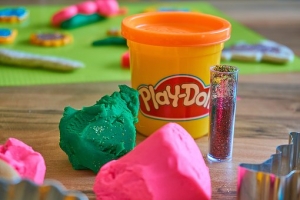 I was making Play-doh animals with my four-year-old niece, Chris, and her three-year-old brother, Neil. While Chris was clearly molding a crude but recognizable dog, figuring what Neil was making was a bit more challenging.

Sometime later, Chris had made another simple animal shape, but Neil had a rather flat slab of dough on the table in front of him.

"What happened to this one?" I asked.