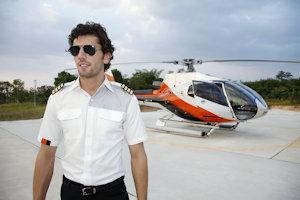 My youngest brother Tony had just completed Army basic training and was on leave prior to his first tour in Germany. I am an Army National Guard pilot, and my other brother is my crew chief. Since we were headed to the air base where Tony was to catch his overseas transport, we offered to take him.

When we landed at McGuire Air Force Base, several of Tony's fellow privates came out to greet him. Tony ran ahead, while my other brother and I followed with his gear. As Tony approached his buddies, he was bewildered by their dumbfounded stares.

Then he realized that his friends weren't seeing his two brothers giving him a lift; they were seeing a new private arrive in his own helicopter -- with a captain and sergeant carrying his bags!