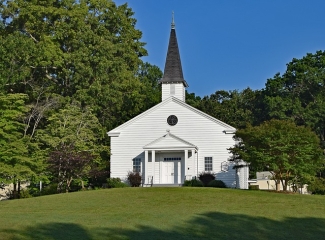 I sure hope attendance at your church was better'n my church. Mercy, pastorin' ain't always easy, now is it? We had us a bunch of sick folk, and them added to all the shut-ins made for a whole lot uh pew cushion to look at from the pulpit.

I got to admit, I was feelin' somewhat put out, but I went ahead and preached anyhows. Only thing was, with all them people missin' the echo in the church gave me a hoot of a headache. My wife said I needed to git out and ride a bit 'cause the fresh air would make me feel better.

Well, she took to drivin' and I took to ridin' and sure 'nuff, she was right. Not only did my head clear up, but what I saw renewed my faith in the Good Lord. I tell you, Brother, I seen miracle after miracle!

My Sunday School superintendent, Hank Weaselbaum had called to tell me that he was so deathly sick, he wouldn't make it to church. But there he was, drivin' down the road with his favorite fishin' pole stickin' out the window. I tell you, only a miracle coulda' snatched him out'a the jaws of death that way!

Then there was my head deacon, Wilbur Snooch. He had done left a message on my answerin' machine that his back was so jerked out'a line that he thought he might have to have surgery. But I want you to know that when we drove past the golf course, there he was, hittin' golf balls on the drivin' range. Hallelujah, our prayers worked!

Edna Brump sent word with her sister that she wouldn't make it 'cause her stomach was all upset and she didn't want to take a chance on havin' a mishap in the church. But glory! There she was, standin' in line at the Feedin' Trough Smorgasbord. Another healin'!

All told, we saw that 20 of our sick folk had takin' a turn for the better and were up and about. Not only that, but I just couldn't help from rejoicin' over all our shut-ins that got themselves healed too. There was Sam Burply, who don't attend church much causin' of him being allergic to crowds, and he was in line to buy a ticket at the ball park.

Margaret Guffhunker, who's been feelin' all poor and sickly that she's done missed the last eight Sundays, she was comin' out of the mall with both arms full of packages.

And then there was Horace Dweedle, who ain't been to church in six months cause'a his bum knee; he was playin' basketball down at the park.

Seein' all these mighty miracles and healin's got me so worked up, I started singin' the Doxology! Yes, sir, Brother Blowhorn, I'm excited! I just know we'll be havin' us a packed house next Sunday, what with all the sick and shut-ins revived by such a touch from Heaven. I look forward to givin' you right nice report.