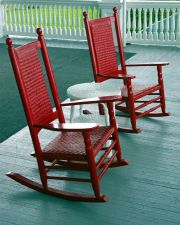 The wives of two Baptist pastors, had a friendship that was unending.

Were sitting together as they worked - their husband's clothes they were mending.

One said to the other, "My poor John is so discouraged with preaching.

He's about ready to give it up - there are no souls that he's reaching."

He said nothing is going right - no new faces does he ever see.

I expect that soon he'll really resign - but this is between you and me."

After waiting a moment the other said, "It's different with my Bill.

He seems so enthusiastic, just to watch him gives me a thrill.

He's praying about a building program - he wants some more pews put in.

He'll have to move a wall to do it, and make a nursery where a junk room had been.

He's looking for Sunday School teachers to teach the classes that are growing.

Offerings are up, souls are being saved - the members' faces are glowing.

A hushed silence fell as they continued their work, making each stitch so neat.

One was patching trouser knees, the other her husband's pants seat.