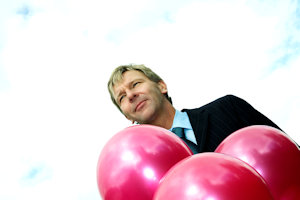 The staff at a business office was hosting a farewell luncheon for a retiring colleague. As the group prepared to go to the restaurant, they found that they couldn't fit the giant balloon they had purchased for the retiring 'guest of honor' into the car. Undaunted, they simply held the balloon out the window as they drove.

The office workers were not prepared for the glares they received from passers-by, however.

As the long line of traffic in front of their vehicle began to turn, they saw that their car was right behind a long funeral procession.

There was nothing they could do but hold on to the balloon with its large farewell message: "GONE, BUT NOT FORGOTTEN."