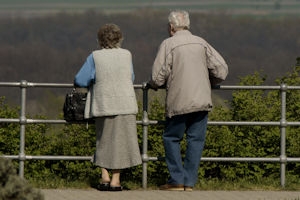 Bernie and Esther were not the most religious couple and in fact, they really only went to church once a year.

As they were leaving the church, the minister said, "Bernie, it sure would be nice to see you and Esther here more than once a year!"

"I know," replied Bernie, "but at least we keep the Ten Commandments."

"That's great," the minister said. "I'm glad to hear that you keep the Commandments."

"Yep," Bernie said proudly, "Esther keeps six of them and I keep the other four."