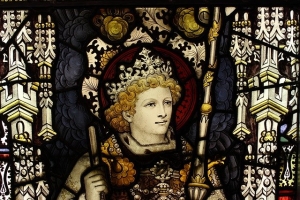 A king had to leave for a long journey, and he wondered who he should leave in charge of his kingdom while he was gone.

One day when he was out riding alone, a woman appeared in the mist. "Soon you will find the one you seek," she said. She waved a hand, and suddenly the king found himself in the simple clothes of a common woodcutter.

The king was puzzled, but he rode on.

A few minutes later he saw a boat in the lake with six noblemen. A storm was coming, and the boat was in danger. Jumping in the water, the king swam out, climbed into the boat, and helped the noblemen row safely to shore.

He heard a voice, "One of these men will be your next counselor. Invite all of them to dinner at your hut in one week's time."

The king, who still appeared to be a mere woodcutter, did so. The noblemen all promised they would come.

Back at his palace and looking like himself, the king heard the woman's voice again. "Call all those noblemen to your castle and invite them to dinner in one week's time."

Puzzled, the king did as commanded. In one week, five of the noblemen showed up, but the sixth was missing. Furious, the king commanded his guards to search the kingdom for the missing guest.

In a short time, his guards dragged the sixth nobleman to the palace and pushed him down before the king's throne. "Why did you not come with the others for my dinner party?" he demanded.

"Sire," said the nobleman, "I beg your forgiveness. But I had already accepted an invitation to dine with a woodcutter this same night. I couldn't accept your generous offer. I am sorry."

The king stood up. "You would rather dine with a mere woodcutter than with your king?"

The king suddenly smiled. "I am pleased. You kept your promise, even at the risk of my anger. You are the man I have been looking for to take care of my kingdom in my absence."

The nobleman became the king's trusted counselor, and ruled wisely while the king was on his travels.