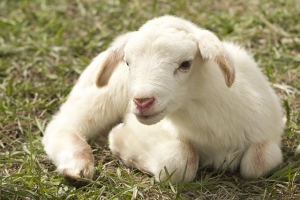 "A little lamb was born all wooly-white with skinny legs and a wet nose, pretty much like all the other little lambs. But as the lamb grew into a sheep, the other sheep began to notice a difference. This sheep had a strange lump on his forehead.

At first, they thought he'd been hit, but the lump never went down. Instead, a large pad of deep, white wool grew over the lump and made it very soft and firm. The lump might have stopped attracting attention except for the fact that this sheep began to use the lump on his head in very strange ways.

For one thing, the lump seemed to weigh down his head so that he always looked like he was bowing and showing reverence t some invisible king. Then he began to seek out other sheep that were sick or wounded. He would use the firm, soft lump on his forehead to help the weak onto their feet and to wipe away tears.

Whole flocks of sheep started to follow him around, but the goats laughed him to scorn. Sheep were disgusting enough, but a sheep with a queer lump on his forehead was more than they could take. They harassed him all the time and made up jokes and taunts: "How come you hang your wooly head? Your lump made out of woolen lead?" And it just infuriated them that he would walk away from them and keep on doing his quiet works of mercy.

So one day the goats surrounded him and rammed him with their horns until he died, and they left him alone in the field. But as he lay there, something very strange happened. He began to get bigger. The bloody wool fell away and revealed a sleek, white, horse-like hair. The soft pad of deep white wool dropped off his forehead and straight out of the merciful lump grew a mighty horn of crimson steel unlike any horn that has ever been or will be again.

And then, as if by command, the massive Unicorn leaped to his feet. His back stood eight feet above the ground. The muscles in his shoulders and neck were like marble. The tendons in his legs were like cables of iron. His head was no longer bowed, and when he looked to the right or to the left, the crimson horn slashed the air like a saber dipped in blood.

When the sheep saw him, they fell down and worshiped. He bowed and touched each one on the forehead with the tip of his horn, whispered something in their ear, and soared away into the sky. He hasn't been seen since."

That's the vision in my mind as I enter Holy Week. It's a portrait of Jesus Christ painted by Isaiah under the inspiration of God and put on display by Matthew 12:18-21. Like every good work of art, this portrait has a purpose, and the purpose is to cause us to set our hope on Jesus Christ. And I am praying that this will happen in your life, because I know that everything else you set your hope on will let you down in the end. But if you hope in Jesus Christ, he will be honored in your life, and you will never regret it.