I was in our living room the other night and realized it happened: baby stuff has taken over every surface of our apartment. And the worst part is, Torre is way too young for it to be his doing! So every crinkly toy and piece of baby gear (bouncer, stroller, playmat) is where it is because I put it there. The reason music rang out when I sat on our couch was because I crammed a musical toy between the cushions. 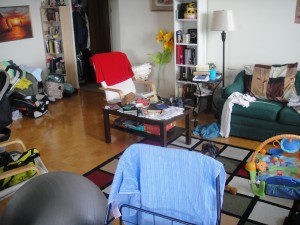 One of the reasons minimalism appeals to me is because I know clutter attracts clutter, and the simplest antidote for clutter is not to own anything extra. But extra things can be beautiful and useful, not just clutter magnets, and the fact that we have an extra person in our family now, it makes sense to have some extra stuff! In fact, the reason our apartment looked inside out was because everything was being used on such a consistent basis, it simply never got put away. 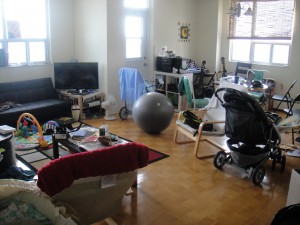 Since Torre was contentedly playing on his playmat, I decided to reclaim my home (well, the living room at least), and let me tell you how nice it was to walk in to this this morning. 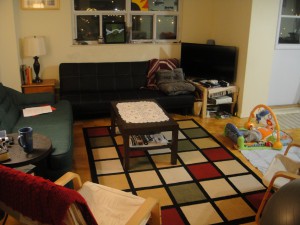 Having dusted off my tidy-up skills, I thought I would share a few ideas and encourage you if you’re living with clutter to tackle it! Keep these things in mind:

Where does your clutter accumulate?