The Sea is Not Full

I was struck by Esslesiastes 1:7 this week:

All streams run to the sea,
but the sea is not full;
to the place where the streams flow,
there they flow again.

Endless cycles are part of nature – the sun rises and sets, seasons change, the rain falls and the wind blows. I remember when I was in grade 5 or 6 being amazed at the idea that I could be breathing air molecules that Cleopatra had breathed, or Shakespeare. It still kind of grosses me out to think about sharing air with all the people on a bus. 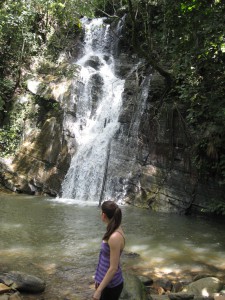 But that’s reality, and it applies to our human lives as well as to nature. We breathe in and out all day long, but it’s never enough; we spend money on food and clothes and toys, and then we go back to work to earn more money to spend it the same way. It might seem depressing, but it’s also freeing when we find a pursuit that is fulfilling in and of itself: Ecclesiastes 8:15 says, “I commend joy, for man has no good thing under the sun but to eat and drink and be joyful, for this will go with him in his toil through the days of his life that God has given him under the sun.” When we surrender the idea of doing enough and simply enjoy doing what we can, there is joy to be found.

Just as a stream can never hope to fill up the sea, and an architect can’t build anything that won’t one day be torn down, a mother can’t love her baby enough that he won’t ever be hurt or afraid. This applies to other areas as well (hello full-time ministry!), but it is so pertinent for me in this season of new motherhood. This verse keeps coming to mind as I see the laundry hamper fill up by the hour (half a load has probably been created over the course of writing this post!) and every time a diaper is filled just after being changed. It echoes in the middle of the night and through long afternoons of feeding and changing and cuddling while the sink sits full of dishes and dinner goes unmade.

This concept of streams flowing endlessly into the ocean gives me peace in the face of constant reminders I can’t do it all. Because really, the dishes will never be done, and the laundry hamper will never sit empty. Sometimes Torre will start crying before I finish my shower, and sometimes I will miss half a music practice because my baby needs to nurse. At the end of the day, everything I’ve done is water under the bridge, and a new day waits to be met and filled. And that’s okay.