My due date (Feb. 7) passed without any excitement other than preparing for my parents’ arrival from Victoria, BC. I spent the day taking it easy at home, then walked with Kristen over to the house where she’s staying for my parents’ visit. We had tea and chatted, then I headed home to wait for Matt and my parents to come from the airport. A huge snow storm was building, and it ended up taking them three and a half hours to get home through the traffic and horrible driving conditions! We had a great night though, and I was so happy the Truck had waited for them to arrive.

That night around 3 a.m. I woke up feeling crampy and moved out to the futon in the living room so I wouldn’t disturb Matt with my tossing and turning. I managed to sleep between these early contractions, trying to ignore my excitement wondering if Feb 8 would be my baby’s birthday! 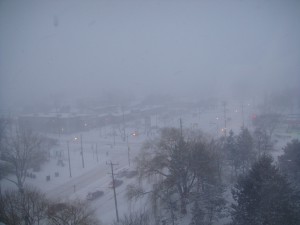 This was the morning of Feb. 8 – I continued to have crampy contractions throughout the day and enjoyed spending time with my parents and watching Matt and Kristen out on the street helping push and dig out vehicles stuck in the snow. A lot of cars needed rescuing and even some transport trucks! I tried to take it easy and save my energy for when labour really got started, but I also walked the halls of our apartment building to encourage things along. 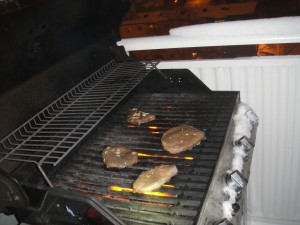 That night, we had steak for dinner and watched a movie before bed. Around 11pm when the movie was over, we timed the contractions I was still having, and they were 7-10 minutes apart. We all headed to bed and wondered what the next day would bring.

Well, I didn’t manage very much sleep before my contractions became too strong to sleep through. Around 2 a.m. I moved out to the living room and started timing contractions, dozing off to sleep in between. By 4:30 I was struggling to cope by myself, so I woke up my mom and she came out to help me time and press on my back. After an hour of that, my contractions were coming every five minutes and lasting a minute or so, so I finally paged our midwife Valerie to let her know I was in labour. She arrived at 7 a.m., checked me out and said that while I was in labour, the baby wasn’t coming any time soon. “Take some Gravol and try to get some rest,” she said, and promised to come back in the afternoon. 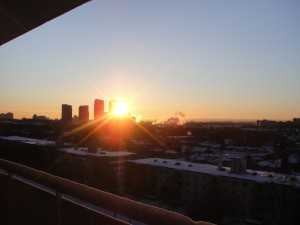 Well, it seemed like Feb. 9 would be the Truck’s birthday, and it was a much nicer looking morning than the 8th! Not that I cared at that point – I took my gravol and mostly slept for a few hours. Little did I know how important that rest would turn out to be! 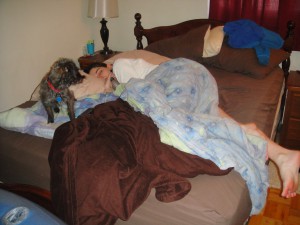 Our mattress is not the best, so my Mom encouraged me to come out and lay on the futon hoping I’d be more comfortable there. I continued to labour and doze, watched Matt play video games and cuddled with Nimoy while I still had a belly for him to rest his head on! 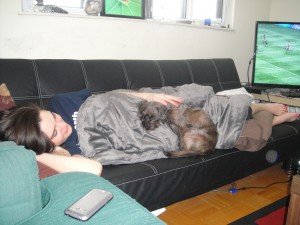 Whether the gravol started to wear off or it was simply labour taking its course, the time came for Matt to turn off the xbox and sit with me so I could hold his hand during contractions. 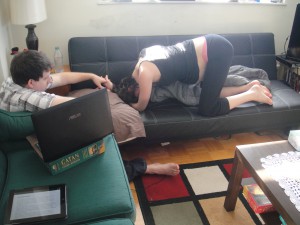 Around 5pm, after putting in a full day at the midwifery clinic, Valerie returned to see how I was progressing. The best news was that I had made it into active labour and could get into the birth pool (getting in too early can slow everything down, so it’s best to wait for labour to be established). THAT was a huge relief, although contractions were still painful. The warm water took the edge off, and I had it in my mind that I would cope so much better in the pool, so I think it was a self-fulfilling prophecy. 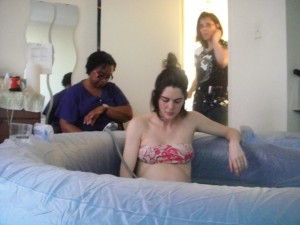 While I was in the pool, Valerie continued to monitor the baby’s heart rate and my blood pressure to make sure we were both handling labour well. I continued to rest as deeply as possible between contractions, not thinking about what was past and not worrying about how much work was still to come. It was definitely easier to relax in the pool, and I was pleasantly surprised to catch myself waking up sometimes as a contraction came on. Matt and my Mom were amazing support through every contraction, especially since I had a lot of back labour and probably couldn’t have handled it without tons of counterpressure and massage. 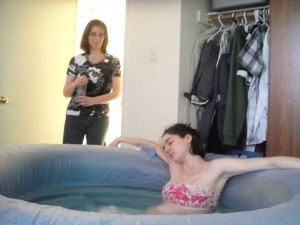 Throughout almost the whole labour, I also had really intense hiccups, and this was almost as exhausting as contractions!

At this point, there aren’t any more pictures because Matt and my Mom were too busy supporting me to worry about the camera, and my Dad was filming with the video camera on and off, but that probably won’t ever make it to this blog

To make a long story short (since this is what my memory has done in the last few weeks anyways), day turned into evening, and evening turned into night. I moved from the pool to the bathroom and laboured on the toilet (which was way more painful, but apparently more effective), moved to the living room and hung off Matt’s shoulders, got back in the pool and basically did a circuit of the whole apartment. My second time in the pool, the backup midwife arrived – one of her clients had gone to the hospital earlier in the day but turned out not to be in labour, and the midwife was so happy because she really wanted to be part of a home birth. It was great to have someone with fresh energy, and she took over massaging my back and checking mine and the baby’s vitals for a little while.

The progress of my labour was defined by even numbers – I was at 2 cm when Valerie first arrived, 4 by the time she let me in the pool, 6 was when the backup midwife came, and 8 is where I stayed for hours. The baby’s head was turned to the side, so it couldn’t descend quite far enough to open my cervix all the way, and my bag of waters wouldn’t break. In a sense it was good because the amniotic sac gave the baby a cushion of space to turn the way it needed to, but Valerie was concerned that my uterus would fatigue and I would get too tired if I remained stalled at 8 for too long. It was a bit before 11pm that she finally decided to break my water and send me to the bathroom for what were now even more intense contractions.

I remember wondering in the bathroom what the neighbours could hear and what they were thinking. I could hear that it sounded like I was being murdered, but I was way past caring. Most contractions at this point were overwhelming, but I tried to pull myself together by the end of each one, not to cry or scream any longer than I absolutely needed to. Matt and my Mom were still constantly by my side, and in some ways the insanity I felt at 8 cm was easier to deal with than my painful contractions at 2cm because I knew I was coming close to the end.

I got back into the pool for a third and final time (it had been topped up with warm water since hours had passed since I first got in) and started to feel pressure with some of the contractions. The contractions were still unbearable, but the baby’s heart rate was excellent, and I knew a trip to the hospital for pain relief would be more misery than it was worth. With the end in sight, I was thrilled to have the backup midwife check me and say that the baby had turned its head and I could push whenever I wanted.

I wanted. So I pushed… and got nowhere. After a few frustrating and painful tries, the midwife let me know that the pushing stage of labour could take over an hour for first-time moms, and that actually came as a huge relief to realize I didn’t have to do it all in five minutes. (Matt, on the other hand, was horrified but wisely kept his mouth shut about how tired HE was!) Remembering that there was no time limit and that my body would work at its own pace let me relax into the pain and conflicting reflexes of pushing, and about 15 minutes later the baby was crowning. Valerie had been resting on the futon since it was now after 1am, but she quickly arrived in our room and got her baby-catching gloves on when I screamed the scream.

I was squatting in the pool with my weight completely supported by Matt who was kneeling on our floor and leaning over the edge of the pool. I remember looking down and realizing that a head was going to appear between my legs, just like in all the birth videos I’d watched over the last many months. It seemed impossible, but as the baby began to crown it became inevitable, and then it happened. Moments later my body began its final push, and as my hands cradled the baby’s head, the body slid out and I lifted him out of the water onto my belly.

“You’re so big!” were my first words of amazement as I held the clean, slippery creature who was my child. He cried, and the midwives started drying him off, while I babbled, “There’s a cord, there’s a cord.” I could only lift him to my belly because he was all tangled up with the umbilical cord around his neck, too snug for me to move, although he was pink and yelling. Valerie ended up turning him upside down and rolling him over to untangle him, then she handed him back and I looked at his feet, and then I looked whether he was a boy, and he was. I hadn’t known the Truck was a boy, but I felt like it was, and I would have been so surprised by a daughter. 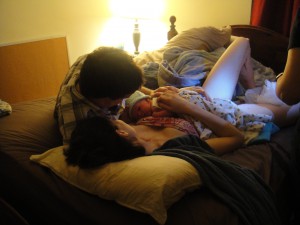 Valerie and Matt helped me move from the pool to our bed so I could deliver the placenta (so weird) and the midwives could monitor any bleeding. Torre lay on my chest and held Matt’s finger in his tiny, brand-new hand. It was a very special time to realize that we were now a family. 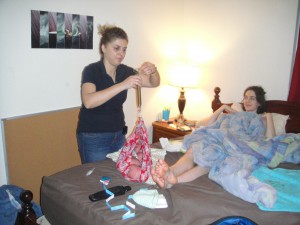 Torre was weighed and measured, the midwives made sure we were both healthy and stable, and they had some phone calls and paper work to take care of, then they went their way and we were left with the wonder of this new baby. 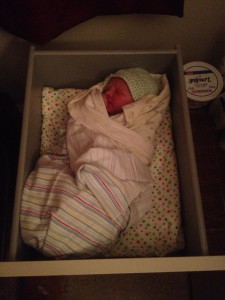 And we are still amazed!