A lot of people have asked how we chose Torre’s name, and the internet is filled with sites that say names mean all kinds of things, so rather than leave you to sort through misinformation and try to guess what we were thinking, let me just tell you 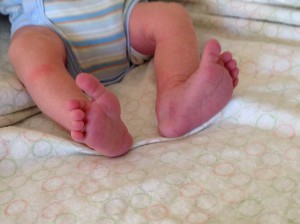 Torre is an alternative spelling of Tory, which means victory. We have spelled it this way in honour of a close friend Matt lost in high school. Another meaning of Torre is conqueror.

Clayton means mortal man. It is Torre’s middle name in honour of my brother, who Matt and I know will be a wonderful uncle and role model and Godly example to our son. Even though he has driven me nuts for most of our lives, my brother Clayton is someone I would be proud for Torre to emulate, especially his humble and kind spirit.

Together, the meaning of Torre’s given names reflects mine and Matt’s hope and faith in God’s plan for victory in mortal man, that God will rule our son’s life and use it for his glory and good.