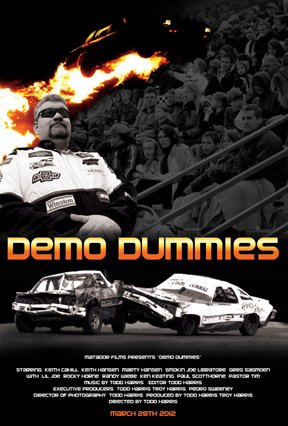 Cybersalt is excited to pass along news of the release of "Demo Dummies" - a Matador Films movie about demo drivers at Western Speedway in Victoria, British Columbia. Many of you know that is the speedway where I am known as the Pastor of Disaster for, amongst other things, driving a demo truck.  So yes, lol, I am appearing in this movie.

If you live in the Victoria area and wish to attend the debut screening of "Demo Dummies" it will be 8pm on Wednesday, March 28th at the Caprice Theatre on Goldstream Avenue in Langford. Tickets can be purchased in advance by calling 778-440-4431 or 250-818-1319.

You can check out the Demo Dummies web site at www.demodummies.com.  You can also view the movie trailer here.

As you have probably heard by now, I have not won any electoral seats in the primaries this year, so I am officially suspending my campaign and returning to working on the Cybersalt Site.  It may have been my centrist message that caused me to fail to get traction with the voters.  It might also be the fact that I am Canadian and was smeared by the "Vote American" lobby.  Of course, I might just be too sexy for that hat.

Thanks to rain delays I got to watch the Daytona 500 live last week!  I sat down on my couch and watched all 6 hours of it - which is impressive since it usually only takes about 4 hours.  If you follow me on twitter (@cybersalt) you already know I was watching the race because you saw my favorite retweets while they cleaned up after Juan Pablo Montoya's little run in with a helicopter jet engine.  It figures that that fiery incident would happen in 2012 - as indicated in today's featured funny picture on the Cybersalt site.  You'll find it at:
www.cybersalt.org/funny-pictures/daytona-500-2012-mayan-edition

There are no new pages on the Cybersalt site today so why not just enjoy a fun game of old school bubbleshooter at:
www.cybersalt.org/games/bubble-shooter

Any of you men out there in the doghouse because you committed a Valentine's Day gift FAIL yesterday?  Today's FunBlog features two tongue in cheek commercials on how to get out.  Not surprisingly, J.C. Penney thinks it's going to cost you!
www.cybersalt.org/funblog/jc-penney-doghouse-commercials

There are 5 updated Funny Sign Pictures on the Cybersalt Site today.  The first one is "Jesus Loves You Church Sign" and from there clicking on NEXT will keep you moving on to the new ones.
www.cybersalt.org/funny-signs/jesus-loves-you-church-sign

Hey look - it's me again!  Where have I been?  All I can say is that I really am a pastor (as much as some of you may wonder) and sometimes church happens.  Hopefully my absence hasn't caused too many of you to stop loving me and if it has today is a great day for us to make up!

Speaking of Valentine's Day, I know lots about February 14th has more to do with making out than making up, but I really am trying to make your "today" better.  I hope I'm at least doing better than the guy in the picture at:
www.cybersalt.org/funny-pictures/valentines-back

Maybe my cause would be helped if I put James Snyder's story of how he met his wife (can you believe he originally thought he had a role in it) on the Cybersalt site at:
www.cybersalt.org/gods-penman/it-all-began-with-a-love-note

If that doesn't help the day go better, perhaps my message from last Sunday will.  It contains some important principles that can help you have greater success in your romantic relationships.  You can listen to "Happy Valentine's Day, Samson and Delilah" at:
www.westsidefamily.org/messages/happy-valentine-s-day-samson-and-delilah