The Story of "Chicken Thursday" 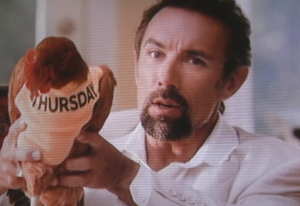 This story begins way back in 2010 when Tim and I began watching “’Til Debt Do Us Part” with one of our free cable deals. After our 3 months of free cable we cancelled (because now we really knew we couldn’t afford cable), and began watching episodes on-line. I don’t know if many of you watch TV shows on-line, but one of the really neat features is seriously abbreviated commercials. Really, you get like one 15 second commercial and then it’s right back to your show. The only downside of these commercials was that the volume was set differently somehow so that they’d blare out about twice as loud as the volume of the show.

Well, one of those 15 second commercials was the Old El Paso guy relaxed and sitting on his couch looking around his pure white living room filled with roaming chickens and saying, “Oh look, chicken Thursday; chicken Thursday.” The segment would end with the jingle, “Old El Paso – mucho fun tonight” to tell us all that tacos would be much better than – oh say, chicken every Thursday.

Ever since that time, “chicken Thursday” takes us right back to those moments of blaring silliness and has become a fun memory for us. That’s it; just a quirky, silly thing that is a bit of an inside joke between us and - once Tim began to start Thursday mailings of the Cybersalt Digest with “Oh Look, chicken Thursday” - perhaps anyone who remembers that commercial.

Now, aren’t you glad you know? Maybe not, because without any mystery behind Chicken Thursday the whimsy is gone and all that is left is weird, lol. Maybe we’ll find something to replace the now retired “Chicken Thursday.” Although, we’re open to continuing them if you like. Leave your comments below.

The actor in the Old El Paso "Chicken Thursday" commercials (which inspired the silly observation of Chicken Thursdays in the Cybersalt Digest) passed away suddenly this past Sunday. Francesco Quinn, son of the late actor Anthony Quinn, died of an apparent heart attack on August 5, 2011.  He was 48.  Our sympathy and condolences go out to his family.