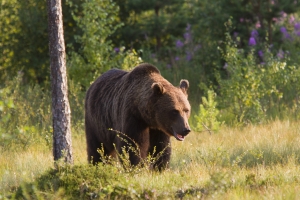 A priest, a rabbi and a Pentecostal preacher all served as chaplains to the students of Northern Michigan University in Marquette.  They would get together two or three times a week for coffee and to talk "shop".  One day someone made the comment that preaching to people isn't really that hard.  A real challenge would be to preach to a bear.  Well, one thing led to another and before it was over they decided to do a seven-day experiment.  They would all go out into the woods, find a bear and preach to it.

It's now 7 days later and they're all together to discuss the experience.

Father O'Flannery, who has his arm in a sling, is on crutches, and has various bandages goes first.  "Wellll," he says in a fine Irish brogue, "Ey wint oot into th' wooods to fynd me a bearr.  Oond when Ey fund him Ey began to rread to him from the Baltimorre Chatecism.  Welll, thet bearr wanted naught to do wi' me und begun to slap me aboot.  So I quick grrabbed me holy water and, THE SAINTS BE PRAISED, he becam as gintle as a lamb.  The bishop is cooming oot next wik to give him fierst communion und confierrmation."

Reverend Billy Bob speaks next.  He's in a wheel chair, with an arm and both legs in casts and an I.V.  drip.  In his best fire and brimstone oratory he proclaims, "WELL brothers....you KNOW that we don't sprinkle........WE DUNK!  I went out and I FOUND me a bear.  And then I began to read to him from God's HOOOOLY WORD!  But that bear wanted nothing to do with me.  I SAY NO!  He wanted NOTHING to do with me.  So I took HOOOLD of him and we began to rassle.  We rassled down one hill, UP another and DOWN another untill we come to a crick.  So'se I quick DUNK him and BAPTIZE his hairy soul.  An' jus like you you sez, he wuz gentle as a lamb.  We spent the rest of the week in fellowship, feasting on God's HOOOOLY word."

Next, the first two both look down at the rabbi who's laying in a hospital bed.  He's in a body cast & traction with IV's and monitors running in and out of him.  The rabbi looks up and says "Oy!  You don't know what tough is until you try to circumcise one of those creatures."