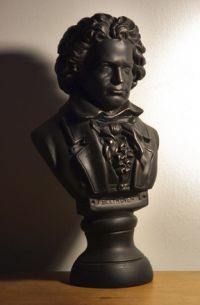 When Beethoven passed away, he was buried in a churchyard.  A couple days later, the town drunk was walking through the cemetery and heard some strange noise coming from the area where Beethoven was buried.  Terrified, the drunk ran and got the priest to come and listen to it.  The priest bent close to the grave and heard some faint, unrecognizable music coming from the grave.

Frightened, the priest ran and got the town magistrate.

When the magistrate arrived, he bent his ear to the grave, listened for a moment, and said, "Ah, yes, that's Beethoven's Ninth Symphony, being played backwards."

He listened a while longer, and said, "There's the Eighth Symphony, and it's backwards, too.  Most puzzling." So the magistrate kept listening, "There's the Seventh...  the Sixth...
the Fifth..."

Suddenly the realization of what was happening dawned on the magistrate.  He stood up and announced to the crowd that had gathered in the cemetery, "My fellow citizens, there's nothing to worry about. It's just Beethoven decomposing."