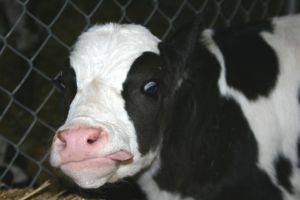 A teacher at a school for blind kids is taking his school's soccer team to an "away game".  They stop for a rest break, and to let the kids work off some energy with a little impromptu practice in a nearby pasture. The teacher is sitting in a nearby diner, explaining to another patron how it is that blind kids can play soccer.

"We made a special ball, with a bell in it, so the kids can keep track of where the ball is and what it's doing by listening for it. They're pretty good at it too."

"Very clever!" remarks the other patron.

Just then they are interrupted as another patron, who is looking out the window, says, "Hey! Are you the guy with those crazy blind kids from the bus?"

"Yes," says the teacher, stung by the way "his" kids are being referred to, "what about it? You got something against blind kids?"

"Nothing, ordinarily," says the guy, still scowling out the window, "but you better get them rounded up quick! They're kicking the daylights out of my best milk cow!"