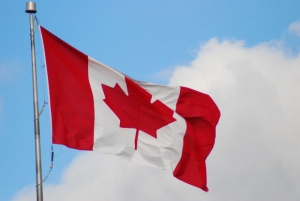 Back in the 1800s, Canada's founding fathers gathered to brainstorm and discuss a name for their new country.

One of the founding fathers really liked what the neighbors to the south did and pitched the idea. "USA is simple. It's catchy. It works. How about if we put the letters of the alphabet in a hockey helmet, pull out three, and that's our name. What do you think, eh?"

Everyone liked the idea and approved. So the 26 letters of the alphabet went into a helmet, and one of the founding fathers picked the three letters. He read them off as he picked them.