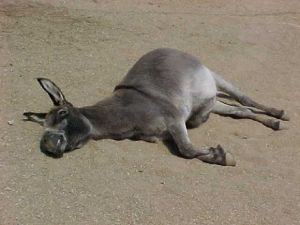 A preacher went to his church office on Monday morning and discovered a dead mule in the church yard. He called the police. Since there did not appear to be any foul play, the police referred the preacher to the health department. They said since there was no health threat that he should call the sanitation department. The sanitation manager said he could not pick up the mule without authorization from the mayor.

Now the preacher knew the mayor and was not too eager to call him. The mayor had a bad temper and was generally hard to deal with, but the preacher called him anyway. The mayor did not disappoint. He immediately began to rant and rave at the pastor and finally said, "Why did you call me anyway? Isn't it your job to bury the dead?"

The preacher paused and then replied, "Yes, Mayor, it is my job to bury the dead, but I always like to notify the next of kin first!"